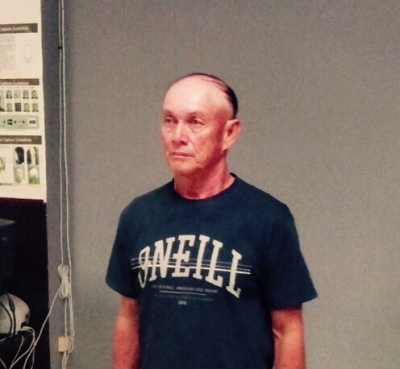 Guam – Dededo Vice Mayor Andrew Peter Benavente’s violent history was highlighted during a magistrate’s hearing today. He appeared in court to face charges related to a terrorizing complaint from last week in which he’s accused of pointing a rifle at several people.

Dededo Vice Mayor Andrew Peter Benavente was arrested over the weekend for allegedly terrorizing two people in Barrigada heights by pointing his rifle at them as they were backing out of a driveway. But as Judge Alberto Tolentino points out in court, this isn’t the first run-in the vice mayor has had with the law.

“The court  does note that there was a previous case that was complied with and otherwise disposed of according to law,” the Judge states.

That case involves a family violence complaint from February 2013 in which Benavente’s wife told police that her husband threatened to shoot her. That case, however, was expunged, according to Assistant Attorney General Rogelio Batarao.

“That is not the one in the police report–family violence–it’s an expunged case, your honor, but this one the victim stated that there was a prior incident with the defendant,” Batarao says.

In the prior incident, Batarao says the victims filed a complaint about Benavente to Dededo Mayor Melissa Savares, but no criminal complaint with the police was ever filed.

Batarao asked for $7,500 cash bail based on the nature and seriousness of the charges and because of Benavente’s history.

“One of the things that the court has to look at is the particular characteristics of yourself, including the fact that you are a lifelong resident of Guam. You are the Dededo Vice Mayor and a member of the Mayors’ Council,” Judge Tolentino points out. “But given the prior history, that causes the court some concern. The court agrees with the government that a cash bail is warranted at this time.”

The complaint says that the victims were backing out of a driveway at a residence in Barrigada Heights when he noticed the vice mayor standing on the side of the road pointing a rifle at him. A second victim reported hearing Benavente yelling “you better slow down or next time I am going to shoot you.”

Inside the car were the two victims, their daughter and and fourth passenger.

Dededo Mayor Melissa Savares says she’s counseled Benavente in the past when the victims had first reported the complaint, but for now he can only be placed on paid leave until the case is resolved at which point the Mayor’s Council will decide how to proceed. She notes that the vice mayor is innocent until proven guilty in a court of law.