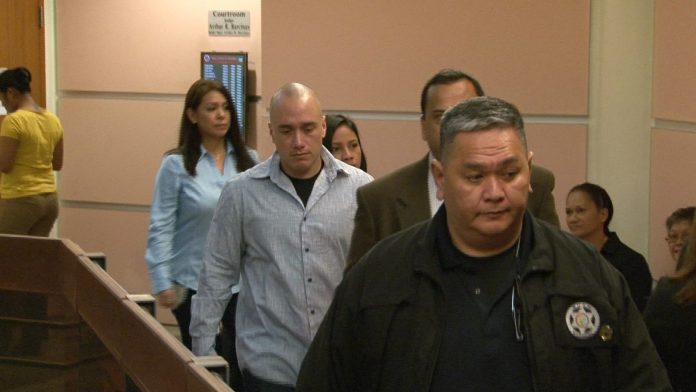 Questions were raised about Police Officer Mark Torre Jr.’s supervised release after an AG investigator mistakenly thought he saw Torre out and about over the weekend.

Guam – There’s no need to put Police Officer Mark Torre Jr. on an ankle bracelet at this time amid public criticism about his supervised release from prison despite facing charges of murdering another cop.

That was what Attorney General Elizabeth Barrett-Anderson said in response to questions on the K57 Breakfast Show this morning with host Ray Gibson.

There was a commotion yesterday in the case when an AG investigator claimed to have seen Torre out and about while he was supposed to be on house arrest. Turns out, the investigator was mistaken and the man he saw was really Torre’s doppleganger who later contacted the AG’s Office to clear up the confusion.

AG Anderson says Torre has been complying with his release conditions. She says the AG’s Office did not request an ankle bracelet because Torre is under supervision by three “upstanding” third party custodians. She also notes that ankel bracelets have primarily been used in the past in domestic violence cases.

“This particular situation, while a very tragic and unfortunate situation, did not call for that kind of monitoring,” she notes.

Torre’s next hearing is on August 20 in Judge Michael Bordallo’s courtroom.