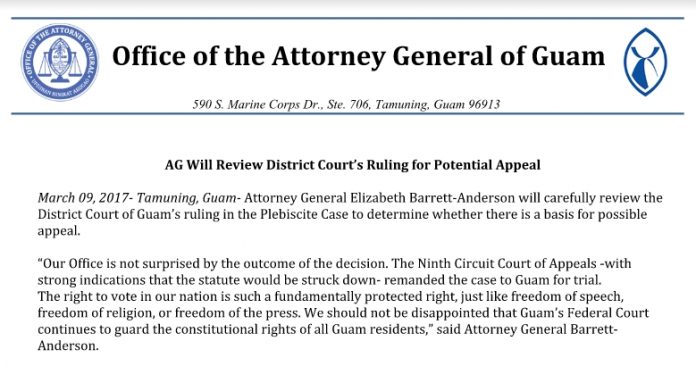 Guam – After Chief Judge Frances Tydingco-Gatewood ruled Guam’s plebiscite law as unconstitutional, Attorney General Elizabeth Barrett-Anderson announced that she will review that ruling to determine the possibility of filing an appeal.

In a release, Barrett-Anderson said “The right to vote in our nation is such a fundamentally protected right, just like freedom of speech, freedom of religion, or freedom of the press.” The AG adds that a plebiscite vote does not make change, but rather “is a political statement, a hope, and a desire, which cannot affect actual change. Only Congress can make a change to Guam’s political status.”

Gov. Eddie Calvo also expressed his disappointment with the decision on Newstalk K57’s Mornings with Patti, saying that sticking to the status quo is leaving Guam as a “pseudo-colonial unincorporated territory.”

“I find it almost revolting that on, what is amounting to an opinion poll, which is really what this plebiscite is — it’s non-binding to Congress,” Calvo stated. “With regulatory agencies that are created, such as EPA, that put billions of dollars in burdens on the people of Guam, and no problem that being unconstitutional because only certain parts of the Constitution apply to the unincorporated territory of Guam. It’s almost farcical. But we’ve got to continue to move from here.”

Judge Tydingco-Gatewood ruled in favor of the plaintiff, long-time resident Arnold ‘Dave’ Davis, saying that excluding non-Chamorros from registering to vote in the referendum is racial discrimination and a violation of the Fourteenth and Fifteenth Amendments. In court documents, Tydingco-Gatewood added that the Insular Cases are not applicable in this case because they apply to incorporated territories, and Guam is an unincorporated territory, therefore only fundamental constitutional rights apply.

Speaker BJ Cruz communicated that, while he expected this decision, he is also dismayed by it. On Mornings with Patti, Speaker Cruz said, “I’ve really, not so much lost faith, but I’m just amazed at the Judiciary’s response to the Insular Cases… I was really dismayed… I cannot believe the courts haven’t decided that those cases have to be reversed.”

Gov. Calvo says he will still move towards the process of self-determination, and will be working with the attorney general to review Judge Tydingco-Gatewood’s ruling for possible appeal to the Supreme Court.