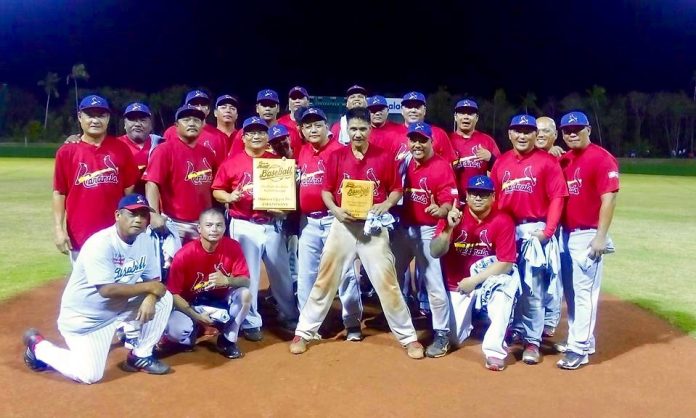 Chalan Pago – The Agat Cardinals completed a six game run through the playoffs to take the 2016 Budweiser Masters Baseball Championship with a 7-5 win over the Sinajana Giants.  The Cardinals won four straight to come out of the loser’s bracket and double dip the undefeated Sinajana Giants for the Championship.

Cardinal’s starting pitcher Tony Yatar went six strong innings for the win allowing three earned runs on seven hits for StrikeZone Player of the Game.  Yatar gave way to ace Jorge Pecina who got the final three outs in the seventh inning to pick up the save.

The Cardinals chased Giants starter Kin Rosario in the second inning scoring seven runs on five hits with three errors through the first two frames.  Troy Anderson chipped in two hits during the offensive explosion with a two RBI triple giving the Cards an early 7-1 lead.

The Giants would add a run in the top of the 5th inning on a RBI single by Lots Idelbong cutting the lead to 7-2.

Idelbong would stop the bleeding on the mound holding the Cardinals hitless over the final 4 2/3 innings as the Giants mounted a late inning comeback.

Down 7-2 to start the 7th inning the Giants would rally with Farnum welcoming Pecina with a 2 RBI double to cut the lead to 7-4.  Idlebong would follow with a RBI sac fly to make it 7-5 and the Giants threatening with just one out and the tying run at the plate.  Pecina would get the final out on strike three looking to give the Cardinals the 2016 title.

Giant’s John Farnum was 2 for 4 with a run, two RBI and three stolen bases in the loss.

Cardinal’s catcher George Pecina was named Masters Upper Division Most Valuable Player going 7 for 17 with nine runs scored and five RBI over the Cardinals six game playoff run.  Jorge Pecina finished 3-0 with 1 save in the playoffs.