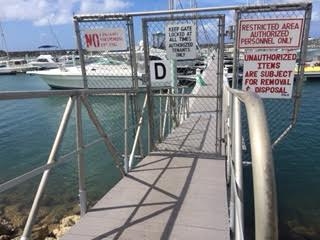 Guam – The Port Authority of Guam celebrated the completion of the D dock of the Agat Marina as well as the grand opening of the Marina Grill restaurant or the former Janzies.

The Port Authority of Guam was able to find $1.5 million dollars in funding from various sources to complete the reconstruction of Dock D at the Agat marina. Today (Weds.) they held a ribbon cutting ceremony.

Port General Manager Joanne Brown. “Dock D back during typhoon Whipha literally came apart at the center and that’s one of the reasons we had to expedite to let you know and everyone else know as to why it was prioritized to be replaced because our tenants down here were very adversely affected at the time because when these docks were originally built back during the Ada administration was over 26 years ago,” said Brown.

The previous docks were made of wood and the Brown says they deteriorated over the years. “So these docks are made out of aluminum. They’re a little more expensive but they’re gonna last a lot longer,” said the Port G.M. Brown says that the docks are the same quality as the docks in San Francisco’s Marina. “Governor you should take some comfort that it’s during your administration the only major upgrades that have been made to our two Marinas have been done during your time,” said Brown.

Funds for the Marina project came from the Department of Interior’s Office of Insular Affairs and an OIA grant. The total cost was $1.5 million dollars and it was awarded to AIC International inc.