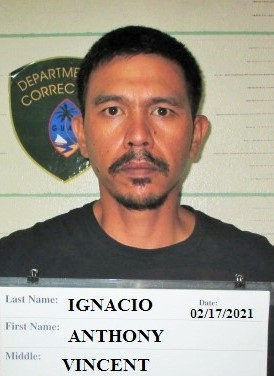 The Guam Police Department has arrested a 36-year-old man for the Agat shooting incident last Tuesday on San Francisco Street in Agat.

A 34-year-old male was transported to Naval Hospital after sustaining injuries from the incident.

The victim, who is in stable condition, was originally scheduled to transfer to Guam Memorial Hospital last night. However, GMH had no available beds, according to Matanane.

One of the suspects in the shooting incident, later identified as Anthony Vincent Ignacio, has self-surrendered to authorities.

More details on the shooting have been released.

According to court documents, the investigation revealed that a dispute happened between Ignacio and the victim a couple of days earlier.

Police received consent from Ignacio to review text messages exchanged with the victim which resulted in the discovery of threats.

According to court documents, The victim called Ignacio out to fight and began to hit the top and side of the vehicle with a black stick.

Ignacio reversed and stopped the vehicle, then exited and walked to the rear of the vehicle and shot the victim with what appeared to be a sawed-off shotgun, according to court documents.

Ignacio has been charged with conspiracy to commit murder, aggravated assault, guilt established by complicity, and criminal facilitation.

“It’s been very very quiet down here and most of our constituents have been home safe especially with this pandemic. We were caught by surprise,” the mayor said.

Susuico added that everyone should stay vigilant and always be aware of their surroundings.

GPD is still actively searching for the second suspect. And no name has yet been released.

This case is still ongoing.