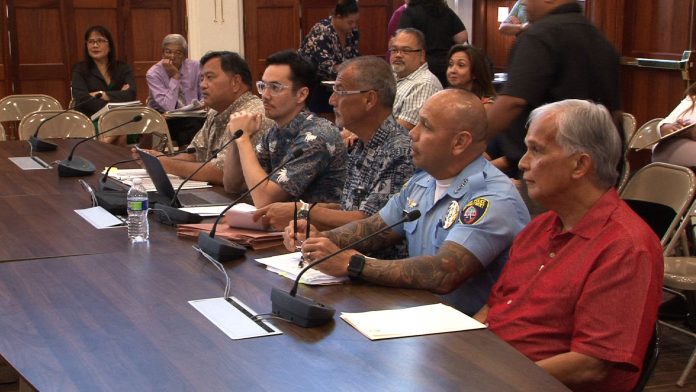 Guam – A public hearing was held on Speaker BJ Cruz’s bill 22 or substitute biennial budget bill. The hearing was required because the substitute version is significantly different from the original version.

Several GovGuam agencies showed up to testify and essentially make their pitch for the piece of the pie. Although it’s not the first time this has been done, this budget bill is different than most in that it is a biennial budget.

Speaker Cruz says that they decided to roll over the budgets for every department which means every department should get the same amount of money they are getting now. Special funds were then appropriated to the agencies that the funds were created for. “The reason we did that, we were seeing that in a lot of these special funds that weren’t being appropriated that they were being transferred out,” said Speaker Cruz.

UOG President Dr. Robert Underwood said the roll over budget was a concern but the real concern was getting the actual cash they are budgeted. “Our greatest concern continues to be that we actually get the budgeted amount,” said Dr. Underwood.

Chief of Police J.I. Cruz said he was concerned about the loss of some special funds that were going to GPD. Cruz says this would mean a $2.7 million shortfall. “Now, what kind of impact does that have to the Guam Police department? It means then that for the special funds civilian positions that are currently under recruitment may not be realized,” said Chief Cruz.

Speaker Cruz responded saying they came up with the roll over budget after seeing a BBMR 9 plus 3 report that shows several agencies including GPD will likely spend less money than they were appropriated for FY17. The 9 plus 3 report is a report of the last 9 months of expenditures and the estimated expenditures for the remaining 3 months of the fiscal year.