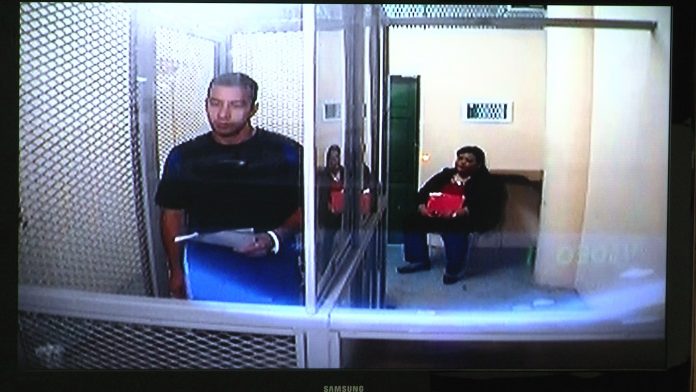 A magistrate’s complaint states that Sterling Crisostomo was showing signs of paranoia and began rounding up his children into the bedroom. His bail was set to $2,000.

Guam – It appears as though Sterling Crisostomo was high on the drug ice when he barricaded himself and his family inside his home, according to the Attorney General’s Office.

Crisostomo,39, was arrested two nights ago at his residence after police spent two hours negotiating with him to finally remove the barricades from his Dai Ichi condo. Police say his wife and five minor children were all inside.

He appeared in Superior Court today where he was charged with unlawful restraint but as a misdemeanor. Crisostomo is currently on probation in another child abuse case from last year in which he was accused of also boarding up his home and starving his children.

“The circumstances of this case, this underlying case before the court, are eerily reminiscent of the case in which Mr. Crisostomo pled guilty,” stated Assistant Attorney General Jeremiah Luther.

According to a magistrate complaint, Crisostomo’s wife, Leialoha Crisostomo, told police that her husband was showing signs of paranoia and that he began rounding up the children into the bedroom and then barricaded them in.

Police say that it was Crisostomo’s 14 year old child who reached out to others through text message.

Assistant Attorney General Jeremiah Luther asked for a $10,000 cash bail. He noted that it’s a high amount for a misdemeanor charge, but says it’s reasonable given the circumstances of the case.

“On May 29 of this year, Mr. Crisostomo entered into an agreement with the People that he would abstain from using drugs or alcohol and from violating the laws of Guam. He was drug tested, which is set forth in the declaration, and he tested positive for crystal meth,” noted Luther. “We believe that he is a danger if he is released to his family and to his community because of his continued drug use and his mental health problems.”

Luther pointed out that under the plea agreement, Crisostomo was sentenced to five years in prison—one year for each count of misdemeanor child abuse that he pleaded guilty to, all to run consecutively.

But, based on the plea agreement, Crisostomo’s sentence was suspended, which means that he would only serve it if he were to violate the conditions of his plea agreement, including the use of drugs or alcohol, or by committing another crime.

“One of the conditions on that plea agreement is that you not possess or consume any alcohol or illegal drugs. As such the court agrees that you are not a good risk for release on your own recognizance. The court does agree with the government that a cash bail is appropriate at this time,” said Superior Court Judge Alberto Tolentino.

Although Judge Tolentino agreed that Crisostomo be held on cash bail, he felt $10,000 was too high of an amount for a misdemeanor charge.

“However in this case, given the charges and the explanation, the court believes that a $10,000 cash bail is beyond what it should be … to meet those concerns by the bail statutes, the court will order that you be held until you come up with $2,000 in cash,” the judge said.

Crisostomo’s next court appearance is set for December 23 at 1 pm.