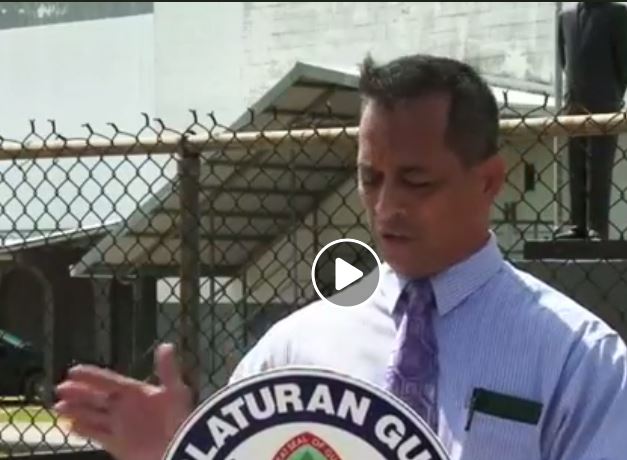 A veteran senator and gubernatorial contender says students, faculty, and administrators are beyond done waiting for relief, so he’s answering a high school’s cry for help by introducing companion legislation to kick-start progress on an already legally sanctioned construction project.

Guam – After years of procurement problems and funding shortfalls plaguing the design and construction of a new Simon Sanchez High School, Sen. Frank Aguon, Jr. is introducing urgent funding legislation to get the ball rolling on a legal commitment to rebuild Guam’s badly damaged public secondary institution of the north.

Standing in front of the old high school, Aguon told a news conference this morning that his Bill No. 305-34 would de-appropriate $1 million from the FY18 general fund and reassign it to the Dept. of Education for the sole purpose of procuring an owner’s agent engineer, architectural and engineering services, and related services for the construction of a new Simon Sanchez High Shool, pursuant to the bill that lapsed into law in mid-May to ensure the buildout.

“One of the commitments that was made from members of the legislature and as a primary sponsor of Bill Number 204, now Public Law 34-101, is that there will be no more empty promises, so we will walk this through in terms of the commitment of realizing the construction of Simon Sanchez High School,” Aguon said during his prepared remarks.

Aguon’s special funding proposal follows three public hearings in which students, parents, and teachers testified for the  construction of a new Simon Sanchez High School after its community suffered decades of deferred maintenance redounding to the need for a new facility altogether.

Aguon says his bill responds to Superintendent Jon Fernandez’s recent announcement during FY19 budget hearings that no funding is available for a new Simon Sanchez High School through the Territorial Educational Facilities Fund.

Fernandez said the Bureau of Budget Management and Research told him that the TEFF funds were already spoken for, so he asked senators for an alternate funding source.

And so it is with an abundance of caution that Aguon is attempting to set aside the startup costs for a new school in the aftermath of recent reports and hearings revealing the Dept. of Administration’s habitual raiding of special funds reserved for such legally protected financial accounts as the Chamorro Land Trust’s home loan and survey and infrastructure programs, as well as first responders’ Emergency-911 operations.

“In addition to that, this administration since the beginning of this fiscal year has obligated the government of Guam, in payroll, in excess of $6 million. And when Mr. Fernandez approached BBMR to ask, if, in fact, there are any funds that can be identified or is available to begin this process of the A&E/construction, there were no funds,” Aguon said.

Aguon is asking his senatorial colleagues to support his special funding bill, because the law requires the identification of funds to get construction underway.

But in an atmosphere of constant shuffling to meet the daily cash needs of the government of Guam, there seems to be no guarantee that the actual construction dollars will be in place when it comes time to start building.

“The legislature has already identified and has set aside, through the Territorial Education[al] Facilities Fund, slightly over $5 million for the construction of the Simon Sanchez High School,” Aguon said.

“And that is where we need to, myself and the members of this legislature, we need to revisit the law that is in place and ensure that the funding mechanism is there, so that Mr. Fernandez can proceed with the construction of the new Simon Sanchez High Shool.”

Current and recent budget bills include appropriations to the Department of Education for various things, including Tiyan lease, JFK, and DOE operations.

The authorizing legislation utilized TEFF funding for the lease payment of Simon Sanchez High School — and there is no lease payment.

The fact is the executive branch has reduced personnel costs and continues to live within its budget and commitment to the $30 million cuts required, respecting the financial position of the government.

The Office of Sen. Frank Aguon issued the following response to Adelup:

Hagåtña, Guam – In response to Adelup’s fact checking statement on Senator Aguon’s Bill 305-34, which would de-appropriate the sum of One Million Dollars ($1,000,000) from the General Fund appropriation in Fiscal Year 2018 to the Office of I Maga’låhen Guåhan (Governor of Guam), and to appropriate such sum to the Guam Department of Education (GDOE) for the sole purpose of the procurement of an Owner’s Agent Engineer (OAE), architectural and engineering (A&E) services, and other related services for the construction of a new Simon Sanchez High School, Senator Aguon releases the following statement:

“The issue at hand is making sure that the governor’s list of priorities places rebuilding Simon Sanchez High School before hiring more non-essential personnel and giving current unclassified employees unnecessary pay raises.  If Adelup really cared about building this school they would have spent more time figuring out how to cut their own expenses instead of fact checking to find more reasons to put themselves first,” Senator Aguon stated. “By statute, the governor can utilize his transfer authority to fund priorities of his administration instead of having his Administration cherry pick which laws to follow.”

Aguon seeks the Democratic Party nomination for governor, approaching Guam’s August 25th primary election. The winner of that election will face off with Republican presumptive nominee and current lieutenant governor Ray Tenorio on November 6th. So far, Tenorio is running unopposed within the local GOP.