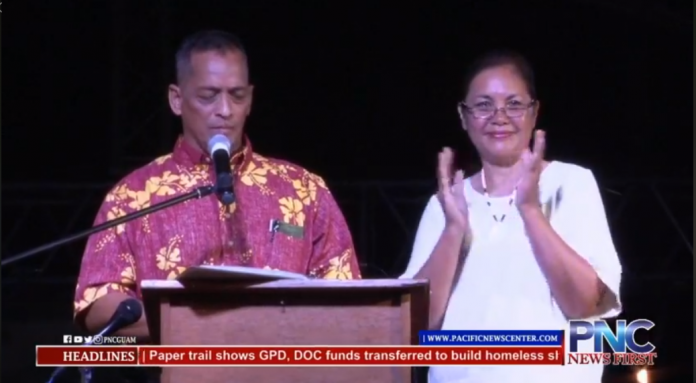 Guam – Aguon-Limtiaco breathed new life into their “Believe” campaign over the weekend, making it official that they’re still running for Governor and Lieutenant Governor of Guam. Even though their names will not appear on the November 6th General Election ballot, following a narrow loss to Leon Guerrero-Tenorio in the Democratic primary, the write-in campaign is on.

According to write-in gubernatorial candidate Frank B. Aguon Jr.  “We’ve been told to throw in the towel, but our people have and continued to say no more!”

At his UNITY RALLY, Aguon made it official, that that he is embracing the write in challenge. He states that “Team Aguon Limtiaco, will fight for and with, the People of Guam…..Alicia and I are one of you. We are everyday people. Many of you have asked us to consider a write in challenge, and because of you, we are proud to take this challenge head on.”

Aguon pointed out that “There is no political party that is more important than the people of Guam. My duty to the party ends, where my duty to the people begins.” The Aguon Limtiaco team had been criticized for not honoring the Democratic Party of Guam’s pledge, where they had signed to not run as a write-in candidate or encourage any of their supporters to sponsor such write in movement. The pledge further states that should a write in movement begin, they should publicly repudiate it.

According to the Former U.S. Attorney, others within the Democratic party, spewed negative smear tact’s against the BELIEVE team. These attacks constitute a breach of trust to all candidates and more importantly, they are a breach of trust to the people of Guam. She further reiterated that “any pledge of unity was broken even before the ink was dried.”

Limtiaco acknowledged that claims have been made that the Aguon Limtiaco team are dividing the party by initiating their write-in campaign, but refuted those claims and called them hypocritical. She also stated that during this recent primary election, it resulted in the closest race amongst two gubernatorial teams in the history of Guam. She pointed out that while Guam Law triggers an automatic recount, she insinuates that Guam Election’s Democratic Commissioners never afforded them fair and due process as afforded by the law because they wanted to  protect the gubernatorial team which the commissioners supported.

The Unity rally did indeed draw a crowd this weekend. Both candidates outlined their platform, and an emphasis was placed on the controversial topic of abortion. Supporters were also handing out cards with instructions to shade the oval, then write in the names.