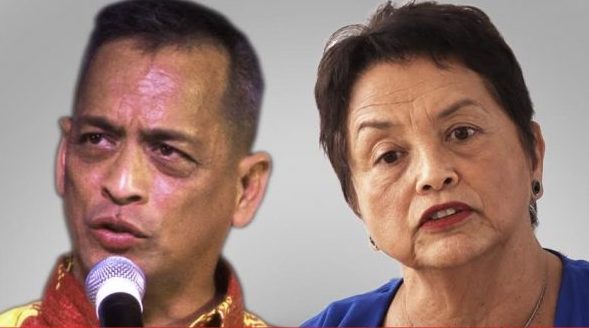 Guam – Sen. Frank Aguon Jr. was feeling like the odd man out at last night’s Guam Medical Association gubernatorial debate. The senator and his running mate Alicia Limtiaco showed up but were not invited onto the debate floor.

Running on a write-in campaign after losing to democratic opponent Lou Leon Guerrero and Josh Tenorio in the primary elections, Sen. Aguon says as a candidate, he remains committed to listening to the issues that affect the community and that means being at gubernatorial forums and debates, whether he’s invited or not.

Aguon did make an attempt to be included in the GMA healthcare debate, one of the most highly anticipated forums of any political season, but the senator and his running mate apparently missed the deadline by a few hours.

“We extended a request for consideration to be a part of the panel or on the stage and in this particular case, the statement that came back was that our request was perhaps a few hours or half a day late. So that was the response and I have to respect that,” Sen. Aguon told PNC during a recess at the GMA debate.

What about future debates? Aguon says he’s eager to go head to head with Leon Guerrero again, but it seems the IN team has been dodging them.

“We were invited to the Guam Chamber of Commerce debate. When Lou Leon Guerrero found out that that invitation was extended, she decided to pull herself out of that debate. I have no idea what the issue is about debating with other individuals. Maybe it’s because I called her out. Maybe it’s because she does not want to face the truth of things that I know that she has tried to do and in terms of addressing issues. And maybe she doesn’t want me to call her out on the pro life issue. I don’t know,” Aguon surmised.

PNC: “Sounds like maybe she doesn’t believe that you and Alicia are bona fide candidates at this point because it’s a write in campaign. What is your response to that?”

“Well let me say this much, she’s gonna believe after we win this write in effort,” asserted Aguon.

The Lou & Josh campaign responded to Sen. Aguon’s assertions, saying, “The Leon Guerrero – Tenorio campaign won the democratic primary and is focused on winning the general election against Ray Tenorio and Tony Ada, the only other team on the ballot. We look forward to every opportunity to tell the people of Guam why a Leon Guerrero – Tenorio Administration will deliver the change that Guam needs.”