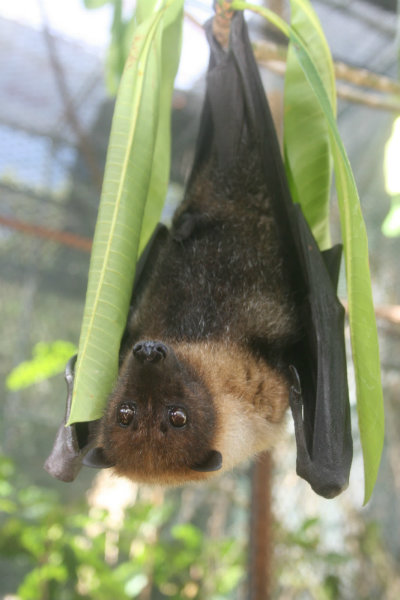 Guam – The U.S. Air Force in collaboration with the University of Guam will conduct a base-wide fruit bat survey on Andersen Air Force Base in the early morning hours of Thursday, July 3, 2014.

This survey will be the first of its kind anywhere to estimate the population size of Mariana fruit bats.

The project, designed by Dr. Tammy Mildenstein, an adjunct faculty member at the University of Guam, has expanded due to the overwhelming support from the Guam community. Funding for the project comes from Andersen Air Force Base, Joint Region Marianas.

Mildenstein has over 17 years of experience studying and promoting the conservation of fruit bats in SE Asia and the Mariana Islands. She began studying fanihi, the Chamorro name for Pteropus mariannus in 2005, when she was invited to participate as a Scientific Advisor on the Mariana Fruit Bat Recovery Team for the U.S. Fish and Wildlife Service. Her work with fanihi has taken her to the Northern Mariana Islands where she developed monitoring methods for the fruit bat populations on Rota. Biologist Isha Alexander is the ‘boots on the ground’ program manager, with prior experience working as a biologist for CNMI Department of Fish and Wildlife on Rota and working on New World fruit bats in Puerto Rico.

“The project was originally planned with 20 survey sites based on an estimated maximum 35-40 available volunteers, the community response exceeded our wildest expectations,” said Mildenstein. “Over 100 people responded to the request for volunteers. As a result, we will be able to use 51 observation stations throughout the forested regions of AAFB. This is history in the making, conducting a fruit bat survey of this magnitude,” said Mildenstein. “It is also the only way to get at an accurate estimate of the number of bats on Andersen Air Force Base. Biologists have suggested this approach in the past, but no one believed we could get this many volunteers to help. I am overwhelmed and humbled by the level of support from the community for this project.”

The 107 volunteer surveyors represent an array of local stakeholders in wildlife conservation. In total, 17 institutions are represented, including federal agencies, local government organizations, universities and colleges, volunteer conservation organizations, and the Guam Zoo (expanded list below). Volunteer observers received a brief training on fanihi conservation needs, survey methods, and bat identification techniques prior to the survey to ensure accuracy and safety during the count.

The Mariana fruit bat is one of two mammals native to Guam and the CNMI and is listed as Threatened by the US Fish and Wildlife Service and as Endangered by the International Union for Conservation of Nature (IUCN). Threats to this species include habitat loss, roost site disturbance, and illegal hunting. On Guam, the brown treesnake is considered a major cause for the decline of the bat population.

In addition to the much-needed baseline population size data, this survey is instrumental in disseminating information about fanihi and fanihi conservation to the community.