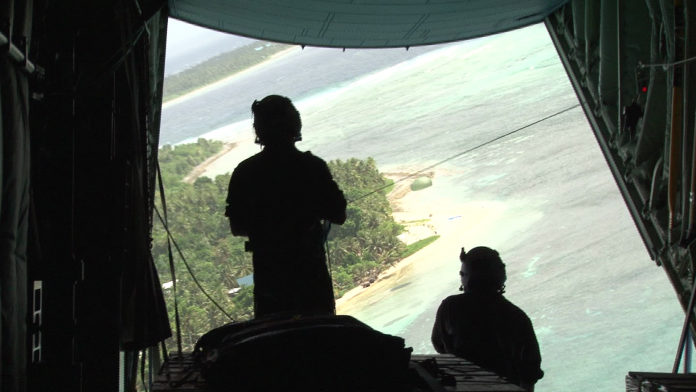 Guam – It’s not just Santa Claus flying through the sky to deliver Christmas presents to good boys and girls, the U.S. Air Force is playing Santa all week delivering gifts in the form of much-needed supplies and food to people in need throughout Micronesia.

Packed over the weekend and collected over several weeks, pallets containing the goods may not be wrapped in holiday paper, but they carry Christmas presents nonetheless.

It’s all for Operation Christmas Drop—the longest running humanitarian airlift operation in the history of the Department of Defense. Airmen from the 374th Airlift Wing out of Yokota Air Base in Japan play Santa once a year and take their C130J Super Hercules for a sleigh ride across Micronesia to deliver presents.

The crew takes off from Guam’s Andersen Air Force Base and this year, we got to tag along for the ride. Inside the C130J Super Hercules we hopped on, close to a dozen pallets were filled with food, water, clothes, blankets, gifts and other needed supplies.

The pallets of goods are then dropped off to remote islands in the Pacific region. In this trip, we visited islands in Chuuk. As the aircraft approaches, loadmasters aboard the C130J push the pallets off into the air. With a parachute attached, the pallets then float down into the water for the islanders to retrieve.

In the remote islands, some only reachable by boat, Bruce Best from the University of Guam’s Telecommunications station trains the islanders in setting up the drop off points.

The crew covers 1.8 million square miles delivering hundreds of pallets throughout Micronesia to some 30,000 people in need.

“It’s not very often that we get to drop to actual people who actually need the supplies in our plane. Most of our air drops are conducted in training but this real life operation helps people in real life so it’s really rewarding to be a part of,” adds Zaeed.

Operation Christmas Drop is quite popular within the Air Force. Now in its 67th year of spreading holiday cheer, and with over a million pounds of goods delivered since 1952, it’s no wonder Air Force service members clamor for a chance to be a part of this noble mission.

Staff Sgt. Chris Hofer has tried to join the last three missions. For this loadmaster, fourth time’s a charm.

“Being able to get out there give the aid that these people need it’s just really humbling,” says Hofer. “One of the kids was jumping and running toward the airplane as we were flying by.”

Hofer says he would place Operation Christmas Drop among the top experiences of his life. “Just even the experience of being able to sit on the back, just getting that alone is enough but to actually them see the help that I’m giving to them and how excited they are about it, it was really, really awesome.”