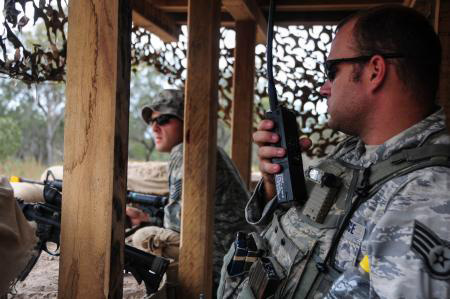 The 36th CRG’s key mission was to open up the initial airhead for the surge that would bring in the remaining ground forces for Talisman Saber. Airhead is a military term used for an area secured in hostile territory used as a base for the supply and evacuation of troops and equipment by air. “We sent an advanced echelon team to Amberley to finalize coordination that has been going on for almost a year,” said Lt. Col. Bill Percival, 36th CRG mission commander for Talisman Saber 2013 and 36th Mobility Response Squadron commander. “From Amberley, we boarded Australian C-130Js and infiltrated Williamson Airfield.”

“In this phase, we are focused on pushing out enemy forces so that we can quickly transition to the next phase,” said Percival. “We just received the main body of the 382nd ECSS, led by Wing Commander Andrew Lancaster. Their task is to make the airfield more robust for sustainment and move toward the humanitarian support phase of the exercise.”

Though the airfield transitioned to Royal Australian Air Force Command on July 22, Airmen from the 36th CRG continue to perform integrated airfield functions with the RAAF.

“One of the interesting things about this exercise is we’re totally integrated, which shows our great partnership with the Royal Australian Air Force,” Percival said. “Our guys are manning the entry control point and defensive fighting positions with RAAF security forces, providing scenario-based and real-world security. The RAAF air load team is working side by side with our aerial porters. Our engineers are working with their engineers to maintain the camp. Every function that we do for airfield management — from intelligence to command and control — is seamlessly integrated with our allied partners.”

Participating in Talisman Saber 2013 provided the Airmen the opportunity to communicate with their Australian counterparts, allowing them to learn different aspects of their job and skills for working in a combined environment. The units learned about each other’s organizational processes, acronyms and equipment.

“Working with the Australian Defence Force, particularly the RAAF 382nd ECSS, has been simply outstanding,” said Staff Sgt. Sydney Okagu, 36th mobile command and control (C-2) controller. “Not only do we work well together, both teams have learned a lot from our interaction in the field.”

Percival said that 382nd ECSS and the 36th CRG create a complementary team. The key differences in how each team deploys their airbase opening elements allow the units to build on each other’s strengths and mitigate weaknesses.

“Both units are separately very good, but together, unbeatable,” he said. “In a lot of other ways – functions, mentality, mission set – we’re still the same. It’s remarkable to see everyone work together. We’re all one team.”

Despite donning different uniforms and conversational vocabulary, members of the Royal Australian Air Force and U.S. Air Force continue to move forward together in Talisman Saber 2013 to improve combined force integration for future operations in the Pacific area of responsibility.

“We have gained an operational and tactical understanding of a key skill set and expanded the operational capabilities of U.S. Pacific Air Forces CRG,” Okagu said. “Working side by side with our Australian partners will enable future coalition operations in a critical region.”