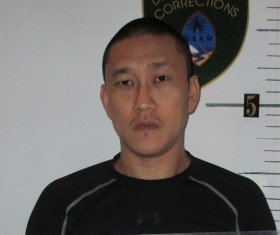 According to a release from Guam police spokesman Sgt. Paul Tapao, Officer Kim went to the victim’s home, knocked on the door and was told to wait outside.

However, without waiting he then entered the home and startled the victim at her bedroom door, states the release from Sgt. Tapao.

The victim subsequently picked up her baby child and sat down. Officer Kim is then accused of inappropriately touching the victim while she was seated with her 2-year-old in her arms.

Yesterday, detectives from the Domestic Assault Response Team known as DART completed their investigation of the incident and arrested Officer Kim.

Kim has been booked and confined on allegations of home invasion and fourth-degree criminal sexual conduct.

According to a statement issued by the airport authority, similar allegations made last year against Officer Kim were dismissed when the grand jury determined there was not enough evidence to charge him.

Officer Kim has not been placed on administrative leave. The airport says his leave status will be determined based on the outcome of his court hearing. 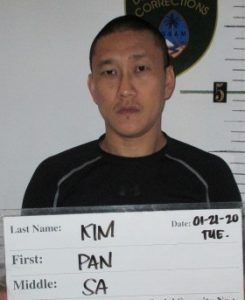 READ the statement from GIAA in FULL below:

Officer Pan Sa Kim is currently on his regular day off schedule for today and tomorrow. After tomorrow, his leave status will be determined according to the outcome (of) his court hearings.

The A.B. Won Pat International Airport Authority, Guam takes matters of this nature very seriously. All law enforcement officers are held to a higher standard, as they are the front-line of ensuring that the laws of our community are upheld and enforced. We have opened our own internal investigation into the matter.

That said, this is also a personnel matter and we all know that there are very specific rules that govern personnel issues. Violating those rules can jeopardize due process for appropriate action, disciplinary or otherwise.

Previous charges of a similar nature made last year against Officer Kim were dismissed when the grand jury determined there was not enough evidence to charge the officer with violating a law.