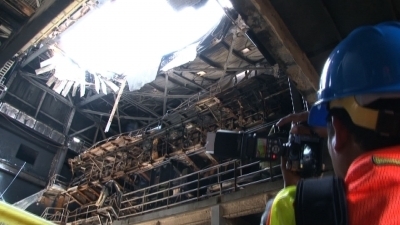 Al Ysrael says the explosion was inevitable due to the lack of maintenance and overall cleanliness of the Cabras 4 plant.

Guam – With the explosion of Cabras 3 and 4 coming up on a one-year anniversary, Guam resident and businessman al Ysrael thinks the explosions were a result of neglect on the side of GPA.

Ysrael says he has heard from knowledgeable electrical engineers that the explosion at Cabras 4 was a result of three safety shut off controls that were either not functioning or turned off. The engineer’s Ysrael is referring to do not work at GPA. Ysrael says the explosion was inevitable due to the lack of maintenance and overall cleanliness of the Cabras 4 plant.

Ysrael also says the continued lockout of the Cabras 3 and 4 explosion site is surprising. GPA maintains that the site was blocked off because the structural integrity of the building was compromised due to explosion. GPA hired Pernix to demolish the charred roof and build a temporary structure to stabilize the building.

“I’m surprised at the lockout of the area. They claim it’s for safety reasons. That’s…suspicious, considering that there are explosions like this, even bigger explosions all over the world and people go there immediately to find out the cause and sure enough in the last year the place have been locked down, none of the standing structures fell down, ” said Ysrael.

The investigation into the 4 explosions is still ongoing. GPA General Manager John Benavente says that GPA says “Our insurance adjuster Greenspan and the property insurers continue to work on the evaluation of the Cabras 4 incident including eventually issuing a report of their findings of the root cause.”