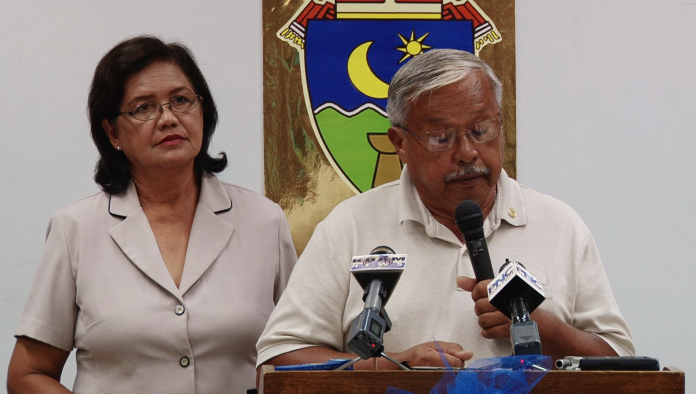 Couples for Christ, World Wide Marriage Encounter and the Sponsor Couple program are all available to married couples who wish to strengthen their relationships.

Guam – As divorce rates continue to rise, the Catholic Church is stepping up its efforts to keep marriages from falling apart.

The Archdiocese of Agana held a press conference Wednesday to introduce some programs available to married couples that aid in strengthening relationships. Three programs were introduced: Couples for Christ, led by Greg and Frances Calvo; World Wide Marriage Encounter, led by Frank and Winnie Taijito; and the Sponsor Couple Program, featuring Richard and Christine Rosario.

Archbishop Michael Byrnes had previously pointed out that Guam has one of the highest rates of divorce in the nation.

Father Jeff San Nicolas was at the press conference and he says he has been working with married couples for Christian counseling for as long as he’s been a priest.

“I think everyone sees this as a sad statistic of Guam being known, as the archbishop pointed out, having the highest rate of divorce per capita and I believe that has something to do with the law which makes divorce so easy here on Guam. As I understand it, you don’t even have to be a resident on Guam, you just move to Guam, stay here for several days and you qualify to get a divorce here on Guam,” noted San Nicolas.

Meanwhile, the Calvo couple says the Christian Life Program is open to all married couples whether catholic or non-catholic. They also say that the program is open to couples regardless of sexual orientation.