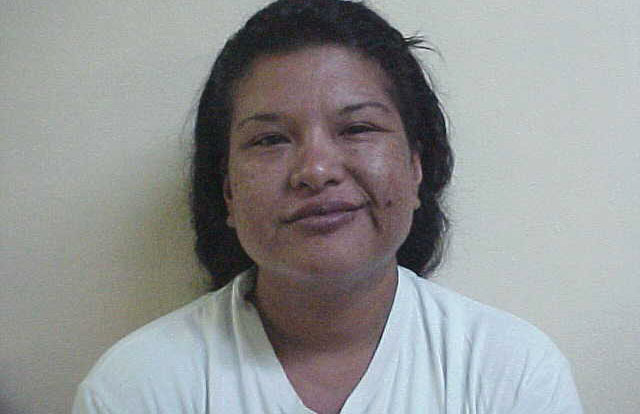 Guam – 32 year old Alejandra F. Camacho Quitugua is being accused of  stealing a cigarette from another woman and then stealing her car.

According to a release from Guam Police Spokesman Officer A.J. Balajadia, Quitugua has been booked and confined on charges of Robbery and Theft of a Motor Vehicle.

The incident occurred yesterday in Tamuning when, Office Balajadia reports, the victim was sitting in the exterior lobby of the Baltec Building in Tamuning when she was approached by the suspect who asked the victim for a cigarette.

The victim said she didn’t have a cigarette and got up to leave. Shortly thereafter she heard approaching footsteps,  her right arm was grabbed and the suspect grabbed the cigarette from her hand, according to Officer Balajadia.

Tumon/Tamuning Precinct Officer spotted the stolen vehicle about 6:30pm last night on Taitano Road in Harmon. They stopped it and arrested Quitugua without incident.

TAMUNING – Tuesday, February 18, 2014, 5:04pm, officers from the Tumon/Tamuning Precinct were dispatched to the FHP Administrative office
located off Rt.14 (Baltec Building).  Officers met with a 39-year-old female who revealed the following;

She was in the exterior lobby area of the Baltec building when a female approached and asked for a cigarette.  The victim commented that she
did not have an extra cigarette and sat down at one of the benches.  The victim stated that she felt uncomfortable so she got up to leave.
Seconds later she heard footsteps and then her right arm was being grabbed.  The suspect grabbed the victims cigarette from her hand and fled.

The victim ran to the FHP office for help.  While inside the FHP office she observed the same female in the parking lot checking vehicle doors.
The victim later noted that her vehicle was missing then recalled that her keys were dangling from her right rear pants pocket when she was initially confronted by the suspect.

Tumon/Tamuning Precinct personnel spotted the vehicle on Taitano Road Harmon at about 6:27pm.  The vehicle was stopped in the Cabalen Restaurant without incident.

Alejandra F. Camacho QUITUGUA 5-18-1981 was arrested for Robbery, and Theft of a Motor Vehicle. She was booked and confined.