All Active Duty personnel on Guam are still banned from going to McKrauts Bar and Restaurant in Inarajan, this includes all Guam Guard active staff and military that fall under the jurisdiction of Joint Region Mariannas. 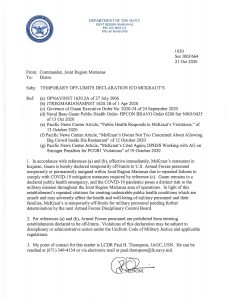 A recent memo from JRM Commander, John Menoni, says that this specific restaurant is “temporarily off-limits to U.S. Armed Forces personnel temporarily or permanently assigned within Joint Region Marianas due to repeated failures to comply with COVID-19 mitigation measures.”

Menoni says Guam remains in a state of Public Health Emergency and that COVID, “poses a distinct risk to the military mission throughout the Joint Region Marianas area of operations.”

“In light of this establishment’s [McKraut’s] repeated citations for creating undesirable public health conditions which are unsafe and may adversely affect the health and well-being of military personnel and their families, McKraut’s is temporarily off-limits for military personnel pending further determination by the Armed Forces Disciplinary Control Board.”

The memo goes on to say that anyone in breach of this order “may be subject to disciplinary or administrative action under the Uniform Code of Military Justice.”

In her memo dated Oct. 16, Aguigui said the Guam National Guard continues to support the Government of Guam and the Department of Public Health and Social Services in efforts to mitigate the spread of COVID-19.

“Some restaurants and/or bars have attempted to circumvent the governor’s executive order. Recently, McKraut’s Bar and Grill in Inarajan was cited for noncompliance with the executive order. Effective immediately and for health and safety reasons, applicable Guam National Guard personnel are prohibited from patronizing that establishment,” said Aguigui.

It all began with a few photos on social media of patrons dining in at McKraut’s in Inarajan. The current Executive Orders and restrictions do not allow for dining in at restaurants. In an interview with Newstalk K57, Ludwig “Lutz” Uhmeyer, the owner of McKraut’s admitted that he broke GovGuam restrictions on indoor dining and having crowds.

“Normally, I put them on the patio but there were so many people that I couldn’t fit them all outside. But everybody had such a good time. Nobody’s sick and everybody is very healthy,” Lutz said.

The restaurant was cited by Public Health for that infraction.