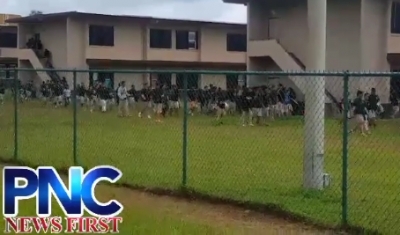 GDOE received, in total, 120 threats to the school system since January 14th.

Guam – There was a total of eight bomb threats today. One at the ITC building and the seven others at Guam Department of Education schools.

At around 12:50 pm, the ITC building was evacuated because of a reported bomb threat. Law enforcement officials conducted a sweep and the all clear was given at 2:52 pm. Meanwhile, GDOE Superintendent Jon Fernandez confirmed that they received bomb threats at Simon Sanchez High School, JFK High School, Daniel L. Perez Elementary School, Benavente Middle School, Oceanview Middle School, Inarajan Middle School and Chief Brodie Elementary School. Fernandez says that all bomb threats today were written and that they are still investigating. GDOE received, in total,120 threats to the school system since January 14th. This includes the Twitter account threat to all schools and the GWA automated phone call for all middle and high schools on February 1st.