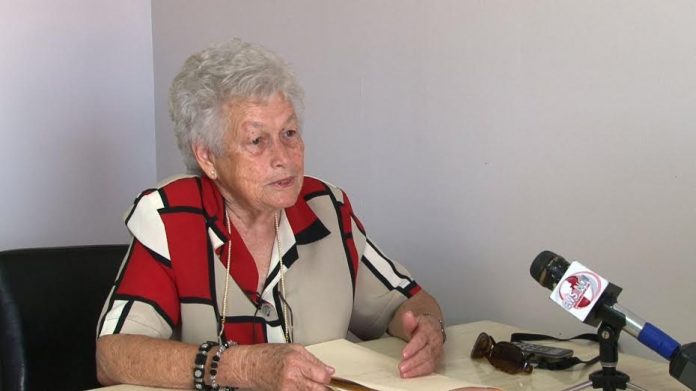 Guam – The Grand Marshall of this year’s liberation day parade Irene Perez Ploke Sgambelluri was only ten years old when Japanese forces took over and occupied Guam. Sgambelluri shared her amazing experiences during the war. Here’s more in our third installment of countdown to the liberation.

“We were having breakfast one morning and we saw planes passing and dropping black objects we didn’t know there was a war,” said Sgambelluri.

She was only ten years old when Japanese forces invaded Guam and took her father, John F. Ploke who was a U.S. Navy Pharmacist Mate First Class, as a prisoner of war. “Why are they taking my dad away from us? You know our mind is still young so we just looked at him and he started to cry. We started to cry too because they held him and they dragged him,” said Sgambelluri.

Her father was taken away to a POW camp in Japan it would be 3 and a half years before she would see him again. Meanwhile she and other Chamorros on Guam were forced to work for the Japanese collecting and cooking food. However they themselves did not have much food. “We were starving. I mean we ate sweet potatoes for 3 and a half years. When someone would give us a chicken my mother would cook that chicken for days until you could swallow the bones,” said Sgambelluri.

The U.S. would eventually return to take the island back from the Japanese but even that was dangerous. Sgambelluri says that when the Americans began to bomb Hagatna she and some family members took refuge under the Hagatna bridge. “And all we did was cry and cry and pray,” said Sgambelluri. Her grandfather and cousin hid in a Japanese bunker and got hit from friendly fire by American planes. “And it hit my grandfather in the eye and his eye was torn from it’s socket and it was hanging and my cousin David was full of shrapnel oh you could see the shrapnel in his body,” said Sgambelluri adding, “Here comes a Japanese corpsman and saw us and he saw my grandfather and he ran back to the hospital and took some bandages and some medicine and he applied it to my grandfather’s eye and then he said go run go and so we thanked him and then we left.” It was merciful Japanese like this corpsman who helped shape Sgambelluri’s view of war. “So you will find people that are good and some people that are not that good. That’s war,” said Sgambelluri adding, “I almost lost my family, my home and the life I knew. To me and other survivors [we] have moved on…to forgive and we have found peace.”