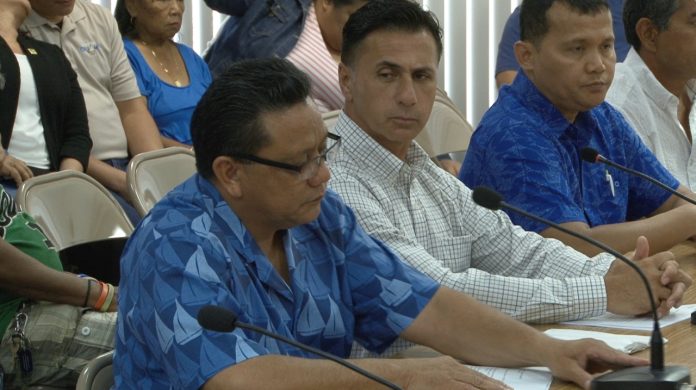 The next hearing is scheduled for Monday, August 1 at 10 a.m.

Guam – At a public hearing to lift the statute of limitations on sexual abuse, the alleged victims of sexual abuse at the hands of archbishop Anthony Apuron all testified in support of the bill, as well as continue criticism over the church’s perceived lack of empathy towards their alleged abuse.

Not one person showed up to testify against a bill that if passed would eliminate the statute of limitations for sexual abuse victims. Who did show up were the alleged victims of sexual abuse at the hands of Archbishop Anthony Apuron. Walter Denton, Roland Sondia, Roy Quintanilla and the brother of the late Sonny Quinata all showed strong support towards the bill.

The first man to come out with allegations of sexual abuse Roy Quintanilla says, “Institutions usually stay silent, stall, delay and use every dilatory tactic in the book to wear down the accusers forcing him or her to give up or at least go away. The bill before us will at last level the playing field somewhat giving victims like me the chance to confront abusers and have our day in court.”

“Senators….he raped me. I wanted him to admit what he had done to me as well as the other victims that sit right here before, I want to face him in a court of law and ask him why did you do this to me, he needs to face his accusers and answer to the victims of his crimes,” said Walter Denton.

Roland Sondia says, “I support the lifting of the statute of limitation on child sex abuse so that victims of sex abuse will have a tool to fight back and get justice, we need it for not only existing victims but for future victims as well.”

John Michael Quinata, brother of the late Sonny Quinata says,  “Remember healing cannot begin without justice. Apuron and all other abusers need to be held accountable for their actions for the pain and the lifetime of suffering for my brother, me and my family.”

It has been over two and a half months since Quintanilla first alleged that Archbishop Anthony Apuron sexually abused him in the 1970’s and at the dismay of the remaining victims and their families, no local investigation has been done and Roland Sondia says no one from the Vatican has contacted him.

“No one from the Vatican has made any attempts to contact me despite false statements from the chancery that they have reached out to the victims,” said Sondia.  “The acknowledgement from Archbishop Hon yesterday should have been the first thing he did when he got on island seven long weeks ago. Instead it took a lot of pushing, picketing, protesting and eventually a defamation lawsuit to extract a positive response from him and the church. If this is what it takes to get a medial response yesterday, imagine the arduous and difficult role ahead of the victims.”

Guam’s apostolic administrator, Archbishop Savio Tai Fai Hon called a press conference yesterday to publicly acknowledge the alleged victims for the first time. The conference comes days after Hon was named in a defamation lawsuit against the alleged victims. Catholic Blogger Tim Rohr repeatedly told senators at the hearing that the world is watching how Guam and the Vatican handle Apuron’s case.

“There is a chance that should this law pass and be enacted into law, that Archbishop Anthony Sablan Apuron, one of the few bishops in the world who is a member of this organization and who is a major player in its mad scheme, will be brought to justice, and the Vatican will finally see that this hiding and moving and secreting about of those who abuse and ravage and rape our children, will not only not be tolerated, but will be pursued and prosecuted and punished by every possible legal means,” said Rohr.

Others who showed support was Concerned Catholics of America president Dave Sablan. Senator Frank Aguon Jr. Called a continuation of the public hearing. The next hearing is scheduled for Monday, August 1 at 10 a.m.