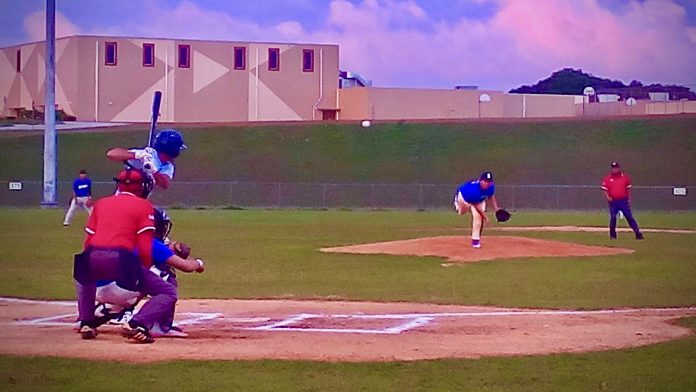 The #7 Sumay Chiefs shook up the playoffs with a 2-0 shutout to knock off the #2 Agat Cardinals.

DEDEDO – Chief’s starter Ryan Coleman went 6 1/3 innings scoreless innings before reliever Blake Lawrence would get the final and advance the Chiefs to round two of the Upper Division Playoffs.

The Chiefs would push a run across in the 1st and 7th innings for the only runs of the ballgame against Cardinal’s starter Joey Taijeron who was the hard luck loser scattering five hits over seven innings with the two earned runs.

Chief’s Devin Bigby doubled with one out in the 1st inning and would come into score on a RBI single by Paul Mills to give the Chiefs the early 1-0 lead.

Coleman pounded the strike zone and kept the Cardinals bats off balance all game allowing just five hits. The Cardinals never got more than four batters to the plate in any inning until the 7th inning when they would load the bases with just one out.

With bases loaded in the bottom of the 7th and the winning run on 1st base, Coleman would give way to reliever Blake Lawrence.  Lawrence would strike out the first Cardinal batter and get the final out on a grounder to first base to strand the bases loaded and secure the win for the Chiefs.

In Saturday first round playoff matchups another high seed fell as the #5 Chalan Pago Amigos (3-4) held on to beat the #4 Talofofo Rangers (4-3) by a 7-3 final.

Amigos starter Paul Campos got the complete game win allowing just four hits and one earned run with seven strikeouts to share Aloha Maid Player of the Game honors with teammate Florencio Binuya who was 2 for 3 with a run and two RBI.  Brandon Panaguiton added three runs for the Amigos who advance to round two of the Upper Division playoff.

Down 4-3 in the 6th inning the Rays would tie it up on a two out RBI single by Justin Candoleta to score Martin Duenas who reached on a hit by pitch to tie the game at 4-4.

In the bottom of the 8th inning Duenas would reach on a one out single and again would hustle in to score from 2nd base on an infield error to give the Rays the extra inning win and advance them to the 2nd round Upper Division Playoff.

Giants starter Josh Duenas kept the Giants in the game against the top ranked Rays allowing two earned runs on seven hits.  DJ Quenga was 1-3 with a run and RBI for Giants who fall to Lower Division Playoff.

Ray’s reliever TJ Sarmiento picks up the win and Aloha Maid POG holding the Giants scoreless the last 3 2/3 innings.  Duenas was 1-1 with two runs scored and Kenji McCarthy reached base four times with a stolen base and run scored for the Rays.