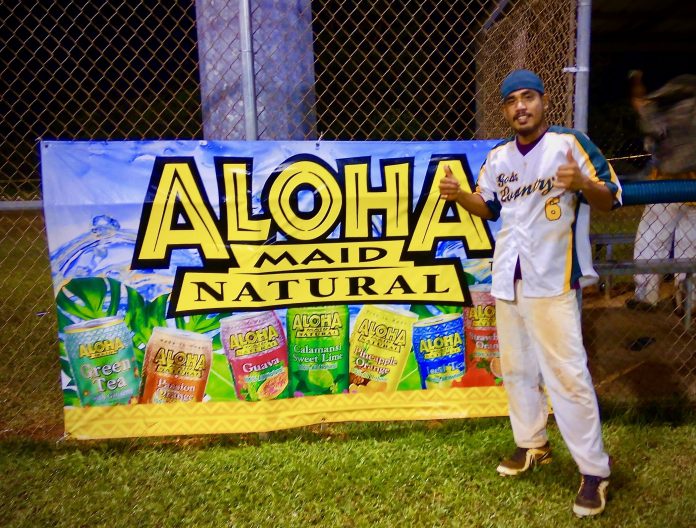 GUAM –The Talofofo Rangers (1-4) picked up their first win of the season behind a 14 strikeout performance by starting pitcher Andrew Taijeron knocking off the Chalan Pago Amigos (2-3) by a score of 5-3 in this past weekend’s Aloha Maid Fall Amateur Baseball action.

The Rangers put four runs on the board in the bottom of the 2nd on a two RBI single by J-Boy Salas and RBI single by Zach Dela Cruz leading the offense.  That was all Taijeron would need scattering three hits and five walks and no earned runs over seven innings including getting the last two hitters on strikeouts for Aloha Maid Player of the Game.

In other action the Agat Cardinals improved to 4-1 with a 7-1 win over the Sinajana Giants (0-5).  Cardinal’s starter Larry Bombon carried a no hitter into the 6th inning before surrending a one out single to the Giant’s Jaythan Eclavea.   Bombon would also lose his shutout giving up a RBI double to the Giant’s Chasten Calvo to drive in Eclavea.

But that would be all the Giants would get as Bombon would bear down and close out the Giants for the complete game win.  Bombon would finish allowing just one earned run on four hits over seven innings and share Aloha Maid Player of the Game with teammate Jarred Alerta who was   2 for 2 with a run and two RBI.

In the weekends other game the AutoSpot Canyons (3-1) would rally for five runs in the bottom of the 4th inning and add a much needed insurance run in the 6th inning for a 6-5 comeback win over the Sumay Chiefs (1-3).

Down 4-0 in the 4th inning the Canyons would finally rally against Sumay starter Ryan Coleman with JR Hattig delivering a 2 RBI double, RBI single by Jathan Muna~Barnes and Shon Muna Jr capping the rally a RBI sac fly to give the Canyon’s the lead.

The Canyons would add a run in the bottom of the 6th inning with Muna driving in Muna~Barnes with a RBI single for a 6-4 lead.  The run would prove the difference as the Chiefs would rally in the 7th inning for a run but leave the tying run on base as the Canyon’s held on for the 6-5 win.

Chief’s starter Ryan Coleman was tagged with the loss despite going six strong innings allowing four earned runs.  Canyon’s reliever Gavin Santos pitched 4 2/3 innings allowing just one run to notch the win.   Muna~ Barnes picks up Aloha Maid Player of the Game honors going 3 for 3 with two runs and an RBI.  Muna Jr finished 2 for 3 with two RBI as the Canyon’s improve to 3-1.