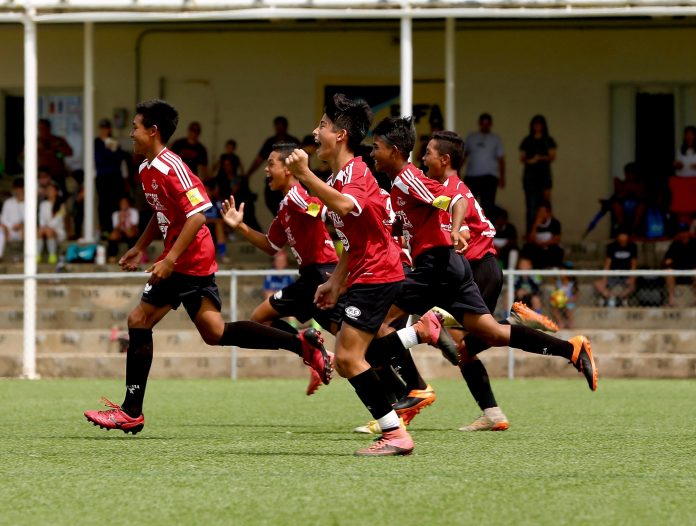 The No. 1-ranked Wings FC survived a scare from No. 4 Guam Shipyard Wolverines to advance.

HARMON – The U14 championship match of the Aloha Maid Minetgot Cup Elite Youth League, is set for Saturday at 6:30 p.m. at the Guam Football Association National Training Center.

The Wings managed to slip past the Wolverines 4-3 in a penalty shootout following a 1-all deadlock in regulation time.

With both teams tied at 1-1 after the first four kickers, Golden Glove winner Marcus Del Rosario cemented the Wings’ advantage for the remainder of the shootout with a huge stop on a shot by the Wolverines’ third kicker Shaun-Paul Martinez. From there, the rest of the teams’ kickers finished their shots for the final 4-3 score.

In the shootout, Mark Iseke, Matthew Iseke, Edward Cho, and Joshua Miller scored for the Wings.

The Wings will play against No. 2 Tigers in the U14 championship match. The Tigers dispatched No. 3 Community First/Days Inn Dededo Soccer Club 14-2 in the early semifinal match. Kris Fernandez led all scorers with five goals and Micah Hennegan scored four. Kainoa Ferguson contributed a hat trick and teammates James Lee and Robert Niu also scored. Christian Kido and John Halili scored for Dededo.

In the U12 division, the Wings will face the ASC Trust Islanders in the championship match Saturday at 4:30 p.m.

The Wings advanced to the final with a 14-1 win over the Wolverines. Taiyo Kanekatsu led all scorers with five goals and teammates Nainoa Norton and Andrew Choi both contributed hat tricks in the win. Daisei Watabe, Justin Joseph, and Kai Pahl also scored for the winning team. Joshua Young scored the Wolverines’ lone goal.

The Islanders booked their ticket to the finals with a 9-2 win over the Bank of Guam Strykers. Riley Rama led all scorers with a hat trick and teammates Jadyn Palomares, Arthur Manglona, and E.J. Sablan each scored twice. Bryan Nakamine and Nathan Sablan scored for the Strykers.

Both championship matches will be available to view via Internet live stream. A link to watch the matches online will be provided before kick off across GFA’s social media platforms (@GuamFootball).

An awards ceremony will be held after each match. In the U12 division, Nainoa Norton finished as the division’s Golden Boot winner and teammate Mason Bonner will be recognized as the Golden Glove winner. The Islanders, Wolverines, and Wings all finished tied for the Fair Play Award.

In the U14 division, Edward Cho and James Lee are the Golden Boot winners and Marcus Del Rosario is the Golden Glove winner. Dededo, the Wings, and Wolverines all finished tied for the Fair Play Award.