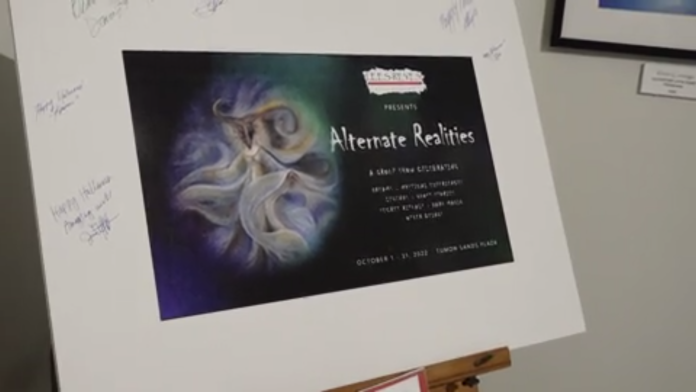 Over the weekend, a new exhibit titled “Alternate Realities” opened up at the Tumon Sands Plaza. The exhibit includes work themed around Guam legends and Halloween-inspired paintings, sculptures, and illustrations. There were 25 artists in this exhibit and more than 80 pieces.

Dawn Lees-Reyes, the owner of the Lees-Reyes Art Gallery, told PNC about her inspiration behind the theme.

Lees-Reyes said, “I came up with the idea with kind of a nod towards Halloween, but I didn’t want a lot of Halloween–pumpkin kind of things. I wanted artists to think about what it is in their life is different, like ghost stories, perhaps some of the legends of Guam. Some of them are ghosty kinds of things. And you know, just a different way of looking at the world that we live in, so alternate realities.”

Bringing in work from the land down under, Robin Hulsman–an Australian-based artist, Gave PNC details on his art, which is a form of abstract expressionism.

He added, “So this one took the most amount of time, it’s got 42 layers and it’s taken about a month and a half to do so, a bit of waiting time between each layer. The most emotional is probably the small one, that’s got a lot in it.”

The Alternate Realities exhibit will be ongoing until October 31st at the Lees-Reyes Art Gallery located in the Tumon Sands Plaza, 10 am – 8 pm.

If you are interested in purchasing any of the artwork in the exhibit, you can email Dawn at dawnleesreyes@gmail.com.