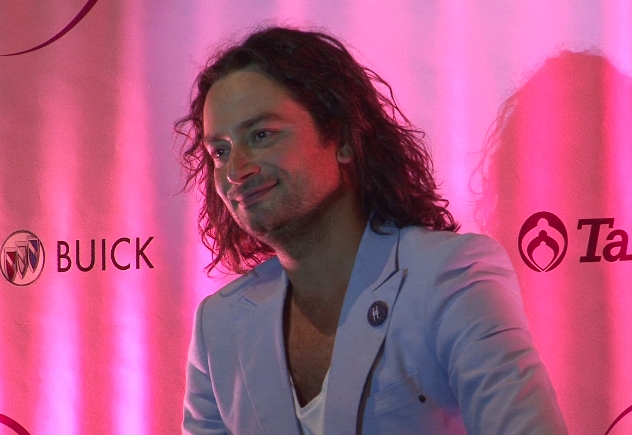 The 3rd Annual Pink Ball is back for its third year and what they have in store for their entertainment line-up will definitely rock you.

Guam – Enjoy a great night of entertainment, fun, prizes, and more with the 3rd Annual Pink Ball! This year’s theme is Pink Rocks! A Celebration of Hope, Compassion and Love.

Guess who will be rocking out at this year’s ball? American Idol Season 4 Finalist and Tony Award Nominee for Best Performance by a Leading Actor in a Musical for his role in Rock of Ages Constantine Maroulis. As the youngest of three children, Maroulis says he was inspired by his older siblings who were musically talented. Maroulis explains that he always had a passion for music, especially rock music, and broadway.

At a press conference held earlier today, he says, “I had a plan. I was a blue collar hard-working kid. I grew up in New Jersey mainly after we left Brooklyn. I always had a briefcase and a microphone. I knew I had to make opportunities happen. I had a five-year plan. I would get through school, get a showcase, get an agent, and get into ‘Rent’ on Broadway, the musical, start a band.”

…and that’s exactly what happened, but Maroulis isn’t just a great performer. He also has a great heart. Maroulis says one of the main reasons why he decided to come to Guam to perform for the Pink Ball is because he wants to help out the Guam Cancer Care, the beneficiary of this event.

He explains, “My grandfather was affected with prostate. My aunt. My mom’s eldest brother’s wife. We lost her son in 9/11 and she was riddled with cancer. We lost her far too early and too young. It was quite a one two punch after losing my cousin Constantine, same name, Gus we call him, and losing her. All the research and all the things we get to do in New York, with breakthroughs, but it’s still so prevalent in families worldwide. It’s something to also perform for my fans here on the other side of the world.”

So now that you know more about Maroulis rock out with him at the Pink Rocks! Ball along with Resorts World Manila broadway musical “Annie” stars Krystal Brimner and Michael de Mesa.

The Pink Rocks! Ball will be held on Saturday, August 6 at the Dusit Thani Resort Guam at 6 pm. For more information, check out Pink Ball Guam on social media.