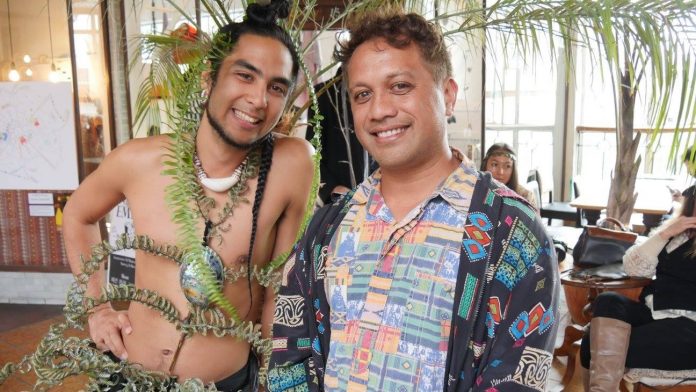 Dakot’ta Alcantara-Camacho says the event is an opportunity for people to take part in the traditions and festivities of Chamorro culture and more.

Guam – Chammorro culture will be featured in an annual festival in New Zealand, thanks to Guam’s Dakot’ta Alcantara-Camacho and his partner, Jack Gray.

Transformation Lab, a research strategy facilitated by Camacho and Gray, will be featuring the Mariana’s islands as well as Chamorro culture in an event at the Northern New Zealand island of Aotearoa.

The 2015 Urbanesia Contemporary Pasifika Festival in Aotearoa is hosting two events including Transformation Lab and  Gupot Sumongsong on November 22. Camacho is a cultural ambassador who says that Gupot Sumongsong is a festive gathering that gives people around the globe an opportunity to partake in traditional Chamorro festivities

To find out more about Camacho, Gray and the upcoming event, read the complete news release below.

A unique celebration of Taotao Håya (taow-taow-hodza) culture is on the menu at Urbanesia Contemporary Pasifika Festival ‘15, serving up a platter of sensorial surprises from the Marianas Islands in the North-West Pacific Ocean. Through cuisine, song, chants and dances, Mangere Arts Centre becomes a Taotao Håya village for a week, the first of its kind in Aotearoa.

Taotao Håya people (also known as Chamorro) descend from a lineage of oceanic navigators, reputedly the first migrants to the Pacific. Stretched out across an archipelago of 15 islands (including the Northern Marianas Islands and Guåhan, also known as Guam), they historically inhabited a combined land mass of 1,000km2. According to the 2010 Census, 69,069 Taotao Håya people live in Guåhan, 12,900 in the other islands, while a whopping 147,798 live in Hawaii and the United States.

An ancient civilization which encountered centuries of Spanish, Japanese and American colonial rule, Taotao Håya enter this important period of cultural revitalisation. Land, language and rituals, inspire new ways to transmit intangible heritage from one generation to the next

During the week of Monday 16 – Friday 20, free Transformance Lab Workshops at the Mangere Arts Centre run from 11am – 3pm. Participants learn to make Traditional Head Bands and perform Traditional Song, Dance and Chants in preparation for the Gupot

Held outdoors on Sunday November 22, the open-air arena of Gupot Sumongsong will come alive with the smells of fresh kelaguen and red rice, a speciality dish. Children are kept entertained with drawing activities, and traditional song, dance and chant workshops for all ages. Alcantara-Camacho and friends perform Creation stories and drop some native beats. Make sure to bring some money, dishes are $5 a plate, pop up shops sell crafts by local and Taotao Håya artists

Bridging contemporary and traditional art forms and rituals, Digital Altar, an art installation curated by Alcantara-Camacho will display live performances and interactions of Taotao Håya artists, honouring the lands of their ancestors, uplifting the mantra ‘all life is sacred’. Next year, Guåhan hosts the Festival of Pacific Arts in May/June 2016, so this village is a first taste for New Zealanders of the inafa’ maolek (spirit of peace and harmony) that awaits.