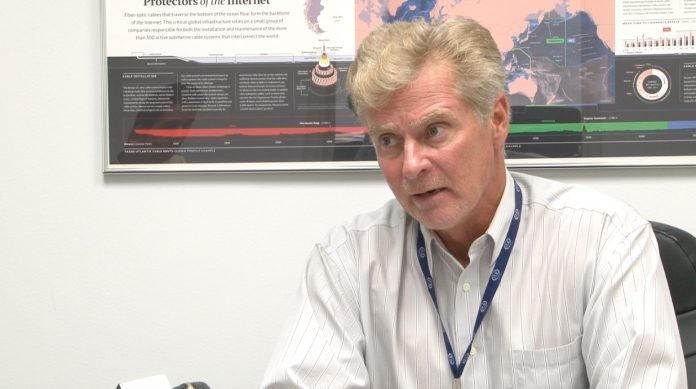 Guam – An update in the IT&E downed submarine cable that has limited connectivity in the Marianas, and cut communications in Saipan for nearly three days.

IT&E is working on two separate relief efforts to restore connectivity to the affected islands. In the short-term, IT&E is still pursuing the primary backup microwave repairs on Rota and Tinian but weather conditions have slowed progress for them. PTI CEO Jim Oehlerking says IT&E is putting in a temporary fiber run on Tinian to be able to access the microwave link stationed there. He explains that this will significantly increase the temporary capacity currently available to the affected areas. Oehlerking says there is a minor amount of capacity in Saipan, allowing for some level of communication. As for a permanent solution, Oehlerking says that they have scheduled a relief ship owned Tyco Corporation from Taiwan. PNC spoke with the owner of CalPac, John Healy, who says that the boat will travel to the site of the damaged cable and release a one man- controlled vehicle. The vehicle will then find the cable and bring it to the surface where it will be worked on. Oehlerking also gave an estimated timeline for when the cable will be fixed.

“On the permanent solution, were finalizing a schedule with Tyco submarine company, that has a boat in Taiwan, also impacted by weather conditions, on scheduling to get in from Taiwan to here. Once we get it on site, I’m estimating about a 48-hour timeframe to actually fix it, but it’s the getting here piece that is the challenge right now, ” said Oehlerking

Oehlerking says that once the repair ship arrives to the site, the submarine cable should not take long to fix.