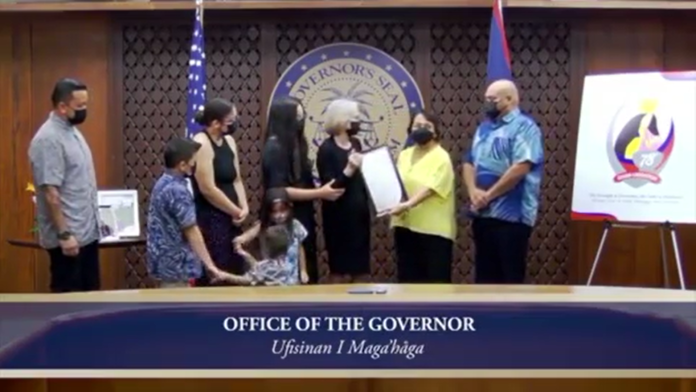 In a statement made by Governor Lou Leon Guerrero she said, “And [I] wanted to honor his family by giving them the highest award that a Governor can give. ”

Gov. Leon Guerrero reminisced on how close her family and Laguana’s family were, sharing how they graduated together, and how Laguana and his wife helped her campaign back in 1994.

Governor Leon Guerrero said, “When I ran for senator in ’94, Joann and Andrew supported us and Joann came and was canvassing with me.” She added, “And Andrew was always there also advising me and you know, calling me up and letting me know about how to approach people.”

Lieutenant Governor Josh Tenorio also shared his memories with Laguana. Expressing how this hit close to home for him as he was related to Laguana. He said, “So I knew Andrew since I was born because his mom is my dad’s older sister and he was so close to my dad.”

The late Architect designed and restored many buildings such as the JFK campus, Dededo Flea Market, Guam Waterworks Authority Compliance Laboratory, and many others.

Melvin Won Pat Borja, Executive Director of the Commission on Decolonization and President for the Department of CHamoru Affairs said, “His many contributions to Guam included the updating of Guam’s building code, the construction and renovation of the John F. Kennedy High School, the renovation and expansion of the Southern Regional Community Health Center, the construction of the Nanbo Insurance Building”

Borja said, “Andy infused a unique cultural reverence in his work. He helped to preserve the indigenous culture of Guam and Micronesia and promoted the history of the communities he worked with. His contributions to the restoration of the capital city of Hagatna, the developmental planning of the University of Guam, and the overall celebration of the CHamoru identity in island-wide projects”

The late Andrew “Andy” Tenorio Laguana was an architect who left his mark on the island of Guam, restoring and designing buildings with the culture of the island. According to Guampedia, his 45 years of experience focused on large-scale government and commercial buildings. He was also the President of Architechs Laguana, LLC. He is survived by his two daughters Jerusa and Drew Ann and his wife Joann Shimizu Laguana.