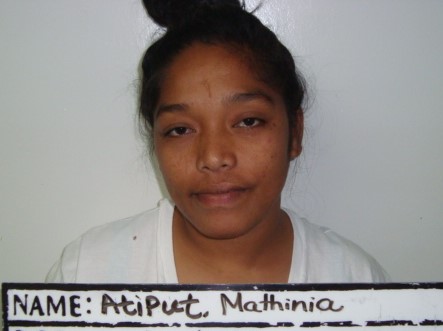 Another arrest has been made in the case involving the fatal stabbing near the Docomo headquarters in Tamuning.

Police have made a third arrest in the stabbing death of 54-year old Arthur Wakuk.

28-year-old Mathinia Atiput was arrested for hindering apprehension. She was arrested on the same day as primary murder suspect Ronat Chutaro, according to Department of Corrections records.

On Tuesday, Chief of Police Stephen Ignacio warned the community against harboring Chutaro who had been was on the run for two weeks before he was captured.

The Chief stated that anyone who helped Chutaro elude authorities would be arrested and charged to the fullest extent of the law.

DOC records indicate that if Atiput knowingly hindered the apprehension of Chutaro, she will face a 3rd-degree felony charge.