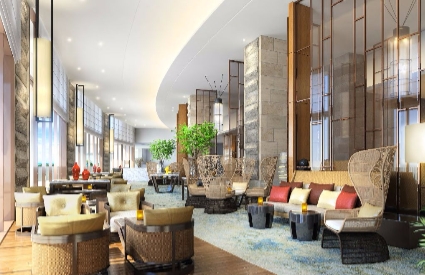 Ken Corporation Group broke ground this morning on what will be their sixth hotel on island…the Tsubaki Tower. Located next to Nikko Hotel, the tower will overlook Tumon Bay.

Ken Corporation President Shigeru Sato says, “This hotel is really really high class hotel. I believe more than 5-star hotel. Because Guam has so many nice hotels, our new construction project is really number one 5-star hotel in the Japan area.”

The Tsubaki tower will have 340 rooms with a larger than standard balcony, a fine dining restaurant, a pool, a banquet hall with a capacity of 600 guests, and an amphitheater.

PHR Ken Micronesia Managing Director Milton Morinaga says, “Another feature this hotel has that no hotel has on Guam is the amphitheater. A lot of the buildings have an outside dinner show arena with a tent, but this one will be an open-air amphitheater that have seating coming down to the yard so different type of functions are possible.”
Ken Corp Micronesia Managing Director Milton Morinaga explains that since the Tsubaki Tower is in between two hotels, their space was limited so they had to be creative with the design. The tower will have a unique fan-shape. “Like when you open a fan, so that way from inside out you’re expanding, so that means there’s a bigger balcony. So people can spend a lot of time at the beach but also in their rooms,” Morinaga states.
With all the features this hotel will include, Morinaga says they wish to attract more Meeting, Incentive, Conference, Event or MICE business.
According to Sato, although Japanese visitors to the island is on a decline, he believes the number of tourists will pick up again in the coming years. In fact, he says, Guam is an ideal destination because it’s a quick getaway. He explains, “Guam is only three hour flight from Japan to Guam. Very short distance. Everybody know Guam is popular especially the young people that want to experience overseas to Guam. Everybody likes Guam, everybody Japan people.”
Sato explains that he believes in Guam because when their company first started investing on island, the number of visitors to Guam grew from 650-thousand to now 1.4 million. “Guam is South Pacific area and one of the key islands so I believe this island will have 2 million tourists in the next ten years,” says Sato.
Even Governor Eddie Calvo pointed out out during the ceremony that the future looks bright for tourism. “Most recently, I’ve been talking to our GVB people. Last year we had 10% growth in tourism. Right now, the first few months, we’re 10% above last year. In all likelihood, if we keep up the momentum, we’ll have about 1.5 million tourists for this coming fiscal year with more hotel rooms being built,” states the Governor.
The construction of the new Tsubaki Tower will cost about $150-million dollars and is expected to be completed by October 2018. The grand opening for the hotel is set for 2019.
Ken Corporation President Shigeru Sato said because he loves Guam so much, part of their plan is to bring a little of the island back to Japan by building a Pacific Islands Club hotel in Okinawa.