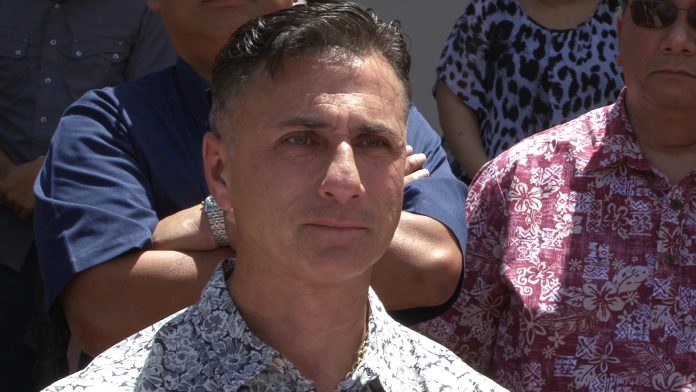 This brings the number of alleged victims to three.

Guam – Explosive details from another man who says Archbishop Anthony Apuron raped him when he was 13 years old. Now 52, Walter Denton is the third victim to come forward with sex abuse allegations against the archbishop.

“It hurts so much just thinking about it. It’s like it just happened yesterday,” says Denton as he holds back tears.

Denton says it happened on April 16, 1977 at the rectory of Mt. Carmel Catholic Church in Agat. He slept over at the request of Apuron who was a priest at the time. Here are excerpts from his statement, some of which are graphic in nature.

“I said I was going to sleep on the lazy boy chair. He said no and he insisted I sleep in the bedroom with him,” he describes. “Sometime late that evening or early morning I woke up feeling something–.”

At this point, Denton is struggling to maintain his composure.

“I felt something penetrating me. I was pinned down to the bed on my stomach with my legs spread apart. I could not move my arms or my legs. I was crying out to him asking him to please stop. I kept saying that it hurt so much,” he recalls as he wiped away tears.

“He got off me and I immediately got off the bed. I was crying and breathing hard. I could feel my butt was all wet. I asked him why did he do that to me. I kept asking him why. he said if I said anything to anyone, no one would believe me,” says Denton.

Denton says he carries this burden with him to this day and that the experience ruined his dreams of becoming priest.

In 1999, Denton says he had a chance to confront the Archbishop at a gathering in Washington. Denton says he was able to speak to Apuron and confront him about the rape. Apuron apologized, Denton recalls, but he refused to forgive him.

“I saw him reach into his bag and he handed me a picture of himself, a CD and a picture of mother Mary,” he recalls. “I looked at him and I said, ‘Are you serious?’ I left and that was the last time I ever saw him.”

At the press conference today, Denton was flanked by his wife, Shirley, Attorney David Lujan, other family members and friends.

“Archbishop Anthony Sablan Apuron needs to be removed,” Shirley Denton stated as she sobbed. “He cannot come in contact with any more innocent young men. It’s a shame. It’s a travesty. He robbed the innocence from my husband and nothing can bring that back.”

Meanwhile, Attorney Lujan, who also represents Roy Quintanilla, the first victim to come forward with allegations of sex abuse against Apuron, says he has no intentions of taking legal action. However, he says he is working with at least three more victims.

You can watch the full press conference on our Facebook Page.