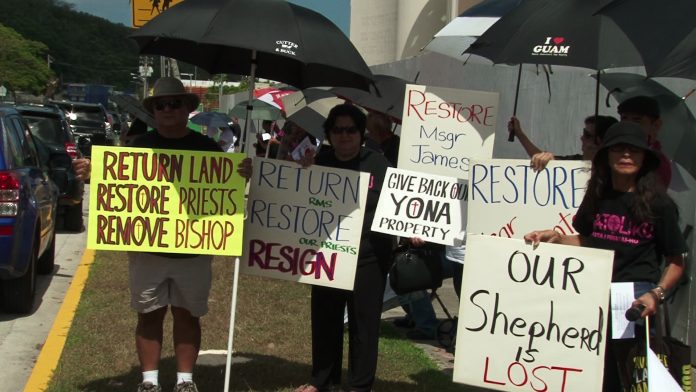 The Laity Forward Movement has been holding protests for the last year.

Guam – Another protest held over the weekend at the Cathedral in Hagatna, staged by the Concerned Catholics of Guam and the Laity Forward Movement.

Yesterday the two groups stood outside the Agana Cathedral holding signs calling on Arcchbishop Anthony Apuron to step down. Spokesperson for The Laity Forward Movement Lou Klitzkie says before the sexual abuse allegations surfaced, the group’s primary demand was for the archbishop to reinstate to beloved priests who were removed from their positions and for the return of the Redemptoris Mater Seminary property in Yona which they believe was given away through a deed restriction.

But because of the scandal in which 52-year-old Roy Taitague Quintanilla accused the archbishop of molesting him 40 years earlier, Klitzkie says “we have no recourse but to ask Apuron to resign.”