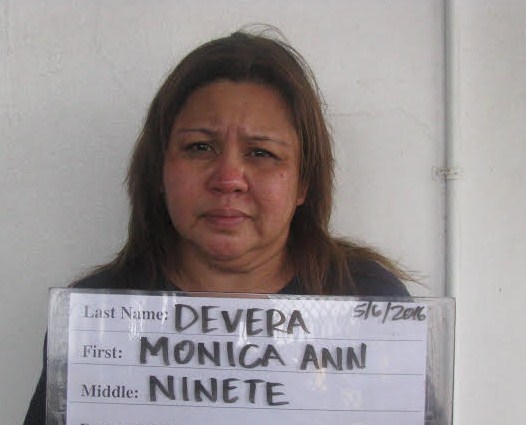 Monica DeVera works as a customer service representative supervisor for the Department of Public Health’s Division of Environmental Health.

Guam – Another public health employee was recently busted for drug possession and manufacturing for both methamphetamine and marijuana.

A magistrate complaint states that Monica Anna Ninete Devera and another individual, Hector Cezar Devera were reported to have been dealing drugs out of their residence in Tiyan.

Police were able to obtain a search warrant and inside the home authorities found numerous illegal drugs and drug paraphernalia. Police also found a black jacket with a Department of Public Health logo on it.

According to the report, police discovered an improvised glass pipe within the right pocket of Monica Devera’s work jacket. Police also confiscated other items from Devera’s residence, including a digital scale, prescription pills identified to be oxycodone, small plastic bags, glass jars, waxy crystalline substance that tested positive for methamphetamine or the drug ice, a three foot tall marijuana plant and surveillance cameras.

Last month, Department of Public Health employee Vera Del Rosario was arrested for alleged dealing the drug “ice” out of her work desk. Police also raided Del Rosario’s vehicle and residence and found multiple drug paraphernalia and methamphetamine inside both her vehicle and home. Police say they also found an explosive device at her residence.