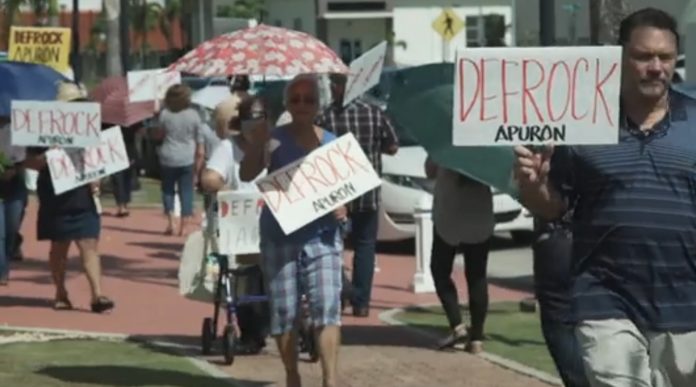 Guam – Another Sunday, another picket. Again, it was held in front of the Cathedral-Basilica. Protesters continue their call for Archbishop Anthony Apuron to be defrocked.

The protests have been ongoing on a weekly basis now for the last several weeks. Initially the message was for Archbishop Apuron to resign.

Now, Catholic protesters want Apuron defrocked which would take away his title, ecclesiastical rights and it would also remove his right to be buried in consecrated ground.

Archbishop Apuron is facing multiple allegations of sexual abuse. At least four alleged victims have come forward, all of whom say the abuse happened in the 1970s at the Our Lady of Mt. Carmel Church in Agat.

In the wake of the serious allegations, Pope Francis sent apostolic administrator Archbishop Savio Hon Tai Fai to oversee the Archdiocese of Agana pending an investigation into Archbishop Apuron.