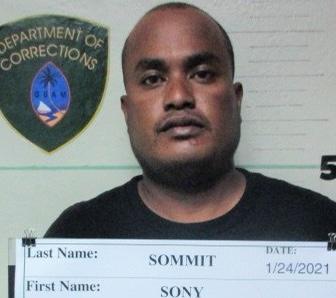 The Guam Police Department has arrested a 33-year-old man for possession of a schedule 2 controlled substance.

Police say that on Sunday, January 24, their officers pulled over a white Toyota Sienna on Route 2 in Agat after officers observed the vehicle’s headlights out.

According to court documents, the police officers saw Sony Sommit trying to move an object underneath him. Then officers asked Sommit to step out of the vehicle and observed the defendant sitting on a plastic straw.

Sommit said that it was just a straw and that right before the car stop, he had thrown a glass pipe that he uses to smoke meth out the window.

GPD recovered both the straw and glass pipe. Both had residue that tested positive for methamphetamine.

Sommit has been charged with possession of a schedule 2 controlled substance as a third-degree felony.