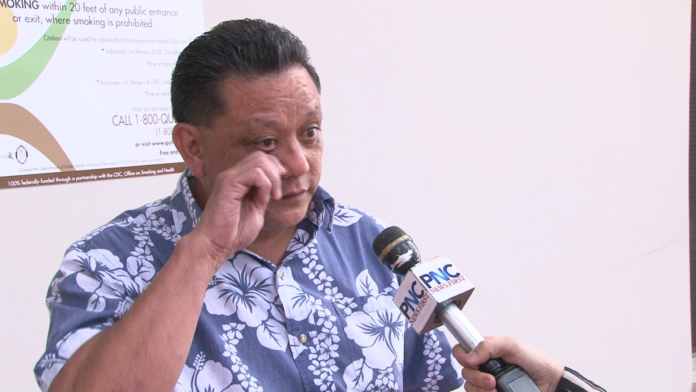 Guam – One of the surviving victims of Bishop Anthony Apuron’s alleged sexual abuse spoke with PNC about the guilty verdict. Roland Sondia was just 15 years old when he says Apuron molested him.

He described the moment he found out about the guilty verdict.

“I just got so emotional when I saw the news alert and I immediately went in and I just shared the news with my wife. We held each other. We cried. But it was the news that we’ve been waiting for to hear for a long time,” explained Sondia as he held back tears.

At a news conference today, Archbishop Michael Byrnes offered a sincere apology to Apuron’s victims and all victims of sexual abuse, saying he was issuing it on behalf of the entire Archdiocese of Agana.

“I convey my deepest apologies to Mr. Roy Quintanilla, Mr. Walter Denton, Mr. Roland Paul Sondia and the late Joseph “Sonny” Quinata for the tremendous damage inflicted upon each of you by now-Bishop Apuron and the Archdiocese of Agana,” said Byrnes. “Your families have suffered as well. I apologize to them, too; most certainly to Doris Concepcion who stepped forward courageously to speak and lobby on behalf of her son, Sonny.

“I’m happy that someone from the archdiocese has shown remorse and is apologizing for everything that happened because we never got that,” Sondia reacted.

We asked Sondia what he would say to Bishop Apuron in light of the guilty verdict.

“Number one, why did he do it? And why did he run, why did he hide from me? While he was out there enjoying being the archbishop—one of the highest positions on this island, here we are suffering,” said Sondia.

“Do you think you could ever find it in your heart to forgive him,”  asked PNC.

“I probably would. That’s the human thing to do. But I would never, ever forget it,” answered Sondia.