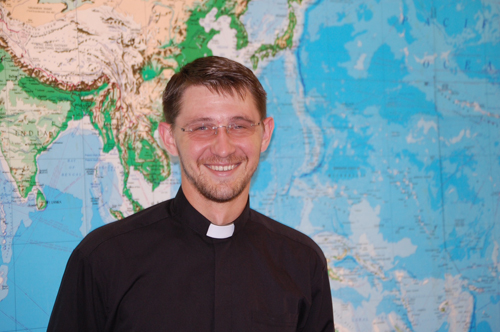 Guam – On Saturday, June 23rd, Archbishop Anthony Sablan Apuron, OFM Cap., D.D. will ordain 29 year-old seminarian Krzysztof Szafarski of Poland, to the Sacred Order of the Diaconate. Szafarski will be ordained as a transitional deacon – meaning that he will later be ordained as a priest.

The Mass of Ordination will take place at the Dulce Nombre de Maria Cathedral-Basilica in Hagatna, beginning at 10 a.m.

Szafarski is being formed at the Redemptoris Mater Archdiocesan Missionary Seminary of Guam in Yona and has completed the requirements for Diaconal Ordination, including a five day retreat of solitude, fasting and prayer which he completed on June 11, 2012 here on Guam.

Szafarski has received formation in a wide range of areas, including: Sacred Scripture, moral and dogmatic theology, canon law, homiletics, Church history, liturgy, and pastoral ministry. The candidate is also committed to ongoing formation after ordination.

The word “deacon” means “servant”, and describes very well this ministry of service in liturgy, word, and most especially in charity. Deacons exercise their ministry through different services, such as, the proclamation of the Gospel at Mass, preaching, officiating at weddings and Baptism, presiding at Communion services, wakes and funerals and certain other celebrations in the Catholic Church.

Once again our Archdiocese of Agana will bless Almighty God for the gift of men who willingly have offered their lives totally for service of God and mankind in love and joy.

The Diaconal Ordination will broadcast on Live Stream at www.aganacathedral.org.

A Na’ Taotao Tumano will follow the Mass at the lanai of the Cathedral-Basilica.  All are invited to attend.