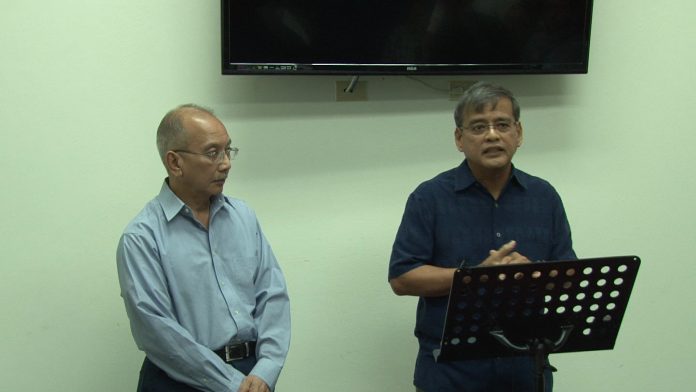 Ousted members of the Archdiocesan Finance Council say Archbishop Apuron initially agreed with a decision not to transfer the Yona property to the RMS but then secretly signed the deed restriction after the fact.

Guam – The former Archdiocesan Finance Council says the controversial deed restriction on the Yona property was all part of one huge conspiracy to give the property away to the leaders of the Neocatechumenal Way and it was all done behind their backs.//

“In light of the recent statements made by Fr. Pius and Archbishop Apuron, we have collectively concluded that enough is enough. It is time to set the record straight,” asserted Richard Untalan, a former member of the Archdiocesan Finance Council.

Members of the ousted Archdiocesan Finance Council held a press  conference today to address statements made about them over the last few years that they were involved in the controversial deed restriction on the Redemptoris Mater Seminary property. The AFC is disputing statements made by Father Pius Sammut, former Chancellor Father Adrian Cristobal and Archbishop Anthony Apuron.

“He appears to be suffering from a case of selective memory,” Unatalan noted.

Untalan says the AFC had actually advised Archbishop Anthony Apuron against the transfer of the property to the Neocatechumenal Way. Untalan also says that their former legal counsel, Attorney Ed Terlaje, had even warned Archbishop Apuron that such a transaction could have negative consequences. Untalan quoted an email Terlaje sent to Apuron after he had learned about the deed restriction.

“Alienation and assignment are words of distinction without a difference. Any documents containing these words would place a huge cloud on title to real property which would result in a protracted litigation and prohibitive cost to remove such cloud. Do you really wan to risk title to the property conservatively valued at $75 million?” Terlaje’s email read.

Untalan also goes back to the original acquisition of the property. He says the former Accion Hotel was purchased for $2 million through a loan with the Bank of Guam. In addition, he says that, contrary to statements made by Father Pius that the Yona property was donated by an off-island donor whose explicit intention was for the property to be used as a theological institute, there were no restrictions on how the property could be used.

Finally, Untalan says Archbishop Anthony Apuron, in the months leading up to their termination, blatantly deceived them during an AFC meeting in September of 2011. During that meeting, Untalan says Apuron agreed with the AFC’s decision to deny a request from the RMS to transfer the property to them. Less than three months later, however, on November 25th, the AFC received a letter from the Archbishop about the transfer.

PNC: “After that point in which [Apuron] agreed with that decision that was made, he turned around and did the exact opposite?”

The deed restriction was signed on November 22, 2011. Two months later, in January of 2012, a meeting was called with the finance council.

“But before we were able to convene, we were unceremoniously fired en masse. For three years we were dumbfounded as to why we were fired. The reason being given at the time was that our terms had expired, which they had not,” explained Untalan. We were fired to hide the fact that the archbishop and others secretly and in violation of canon law, and perhaps civil law as well, not to mention their fiduciary responsibility to the catholic faithful, gave away the Yona property to the RMS, a separate entity controlled by the NCW, for free.”

You can read the full statement by clicking on the file below.