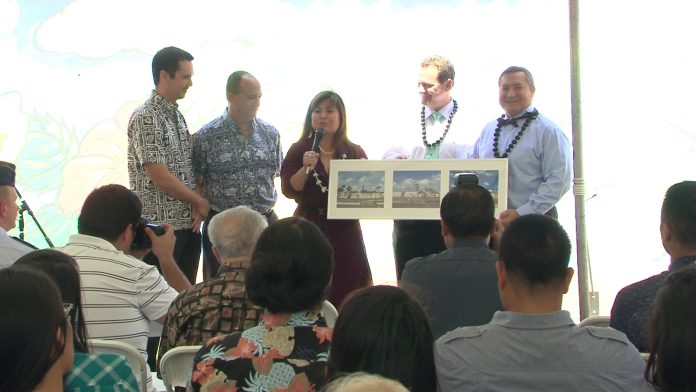 Two years after the restoration project began, the Archbishop Felixberto Flores Loop is turned over to the Guam Visitors Bureau.

Guam – Two years after work began on the restoration of the Archbishop Flores Memorial Loop, it is now being rededicated and turned over to the Guam Visitors Bureau.

The Lt. Governor’s Islandwide Beautification Task Force took the memorial loop under its wing and together with the University of Guam’s art students and other partners, long term improvements were made to the monument. The site includes a newly painted and sealed outer ring, a mural and other features. GVB General Manager Nathan Denight spoke fondly of Archbishop Felixberto Flores.

“To see this monument revitalized has special meaning to me and my family so we wanna thank everyone involved for making this happen,” says Denight. “In fact, growing up I called him grandpa bishop. He was just like another grandparent to me he would come over once a week and we would have lunch and it was just very fond memories of him.”

Archbishop Felixberto Flores was the first Chamorro to serve as Archbishop of the Archdiocese of Agana.