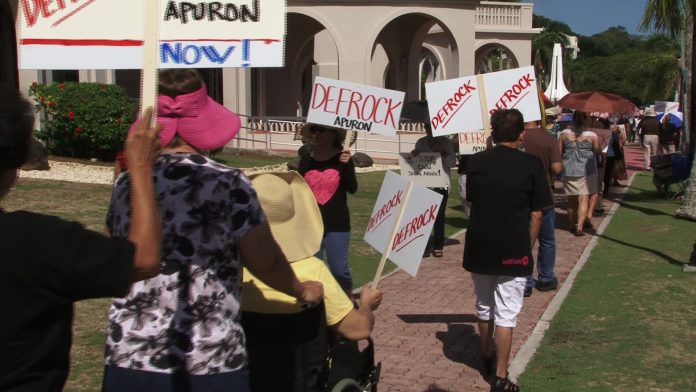 Protesters have changed their message from “Apuron Resign” to “Defrock Apuron.”

Guam- The number of Catholic protesters has been growing in the last few weeks. They were at it again yesterday, picketing in front of the Cathedral Basilica, but this time their message was different.

In the church setting, defrocking of a member of the clergy would essentially remove their title, rights and ecclesiastical status.

Mary Lou Garcia-Pereda, one of the protesters, says the message has changed because the Archdiocese of Agana has failed to take action since allegations of sexual abuse surfaced against Archbishop Apuron.

“We want him to be defrocked following the four accusations of sexual molestation and with the church’s inaction, I think it’s time that he pay the ultimate price and that he be defrocked so that he won’t hae the honor of being buried in the sanctuary of the cathedral when his time comes. We don’t want him to have any kind of semblance of respect or anything, considering what he has done to the children,” explains Garcia-Pereda.

Archbishop Savio Hon Tai Fai, the newly appointed apostolic administrator for the archdiocese, released a statement yesterday, noting that all four allegations have been sent to the Holy See.

He also says in his statement “I would further like to assure everyone that I have recognized the issues raised by all those concerned and, being deeply moved by the way they expressed themselves, am earnestly praying for them, without prejudice to both the alleged victims and  the accused.”

“He has not done what the pope has said. The pope has indicated that care for sexual abuse victims must take priority. He has not done that. All he has done was ask for peace and harmony and kumbaya–that kind of thing. I’m sorry. It doesn’t cut it for me. Something needs to be done and now we’re calling for Anthony Sablan Apuron to be defrocked,” says Garcia-Pereda.

You can read Archbishop Hon’s full statement by clicking on the file below.