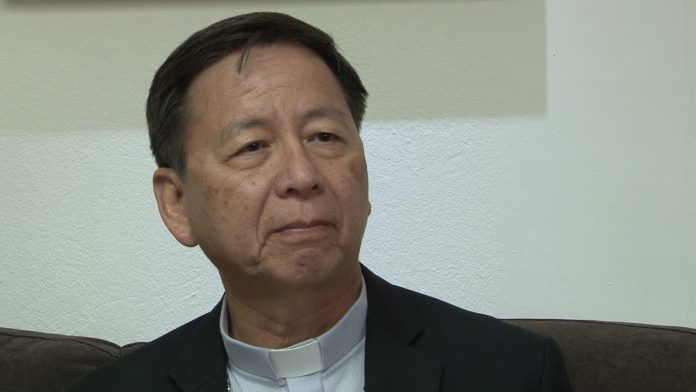 Archbishop Hon says he welcomes even the “bad” criticism.

Guam – It’s been four days since Archbishop Savio Hon Tai Fai publicly addressed the community regarding the serious allegations of sexual abuse against Archbishop Anthony Apuron, and despite an open call to meet with the alleged victims, no such meeting has taken place.

Although some have bemoaned that progress is slow-moving, Archbishop Hon has made some significant changes within the church since his appointment as apostolic administrator about two months ago.

“First thing, I have to reach my priests, all of them, and also the religious and also the lay leaders whenever possible, even if they are of other opinions,” says Archbishop Hon. “I’m here, just want to listen to create a climate of serenity, which we may talk, we may communicate and to avoid misunderstanding or undue communication. That is my purpose.”

Some of the changes Archbishop Hon has made include replacing and appointing new church leaders, such as a vicar general, a chancellor, a sex abuse response coordinator, a spokesperson, as well as ad hoc committees to examine weaknesses within the archdiocese. He also retracted some statements, some orders and even cleared some church leaders’ names, in particular, Father Paul Gofigan and Msgr. James Benavente.

PNC: “Have you met with any of [the plaintiffs] yet ever since the press conference?”

“No. I had no chance yet … no chance in a sense that I welcome them, of course, and I try to make myself available. This is for sure,” says Archbishop Hon.

Archbishop Hon welcomes all the criticism from the community, whether good or bad.

“I think the church today has to be very open to any criticism from anybody because they may be good for us to rethink, to reflect, and how to improve our services to the people. So first of all, I welcome [it]. I wouldn’t say that you gave me hard criticism so you are bad. No, I wouldn’t do that,” explains Archbishop Hon.

Meanwhile, Archbishop Hon says while he has achieved much during his two month stay here, there is still more work to do. The Archbishop is still in the process of completing his canonical visitation of the two seminaries and all 26 parishes on Guam. So what happens after the visitations are over?

“I say to my brother priest, you know that I’m here only for the time being, but you have to go live together and then have a plan of your own. So we work together closely with certain data which is the minimum data we need to process. I think after the review, I would not exclude some changes will be made,” he says, “always for the good of the archdiocese.”

Archbishop Hon emphasizes that he has an open door policy and is willing to make the time to meet with any member of the Catholic church to address any issues they may have.