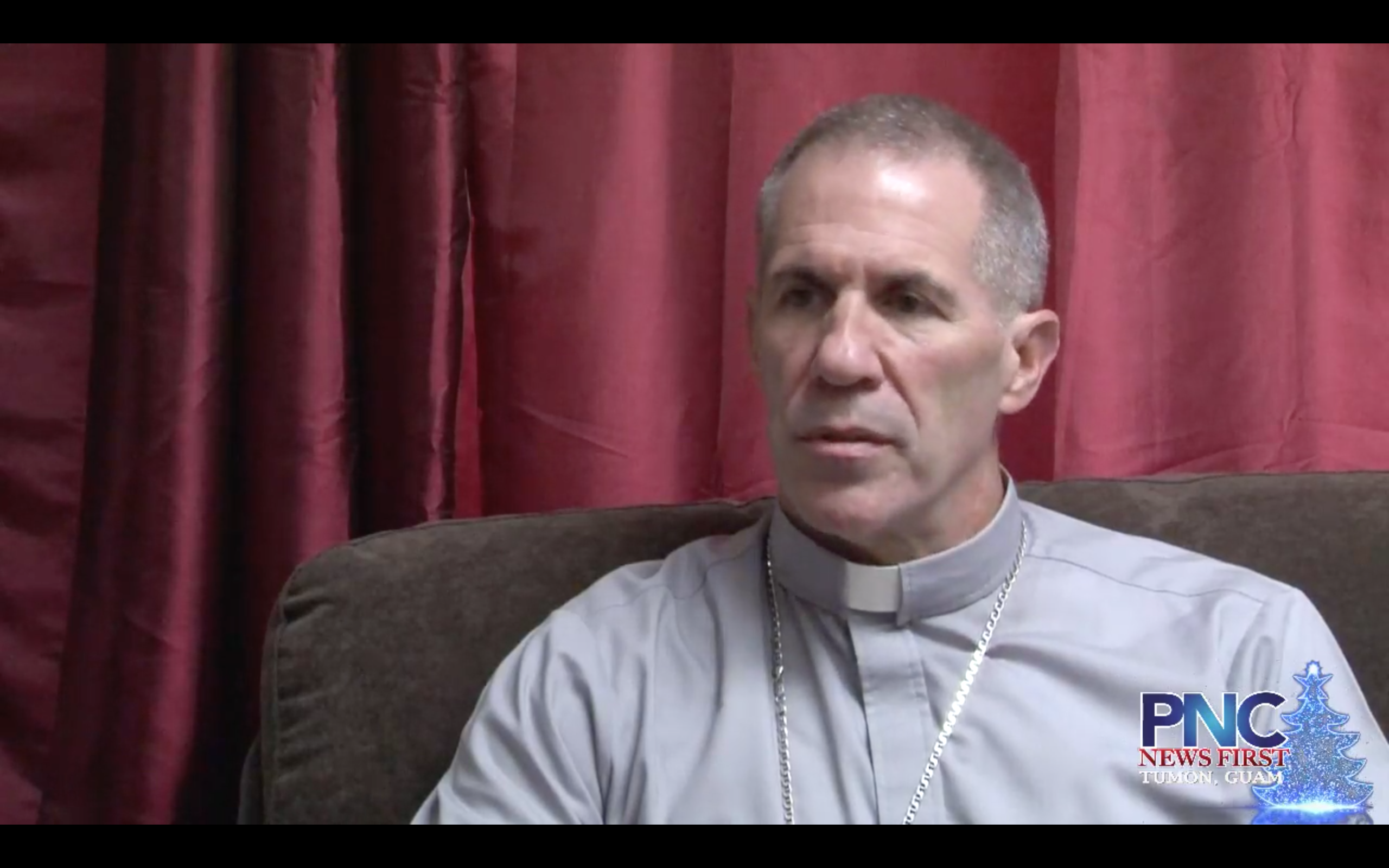 Archbishop Byrnes was appointed to serve Guam during a tumultuous time for the catholic community.

Guam – It’s been a year since Archbishop Michael Byrnes took over the reins of the island’s catholic community. So we sat down with the archbishop to reflect on the past year and some of the accomplishments, as well as failures, he’s dealt with.

“The first year is always the transition year,” said the archbishop, who was appointed by Pope Francis on October 31, 2016 as a coadjutor archbishop.

As the island is well aware, in that year’s time, the archbishop has faced many challenges here.

“So last year I was coming, really not knowing, never seen Guam, not knowing what I’m gonna face. And the press and a bunch of other people were at the airport and it was just overwhelming. And I came back this time, picked up my bag, walked out and waited for Father Jeff to pick me up. So then it was just kind of coming to, where am I coming to? The other day, I was like, ‘I’m coming home,'” explained the archbishop.

And certainly within that year, much has transpired. The number of sex abuse lawsuits filed against the church more than quintupled to what seems like epidemic proportions; Archbishop Byrnes’ predecessor, Archbishop Anthony Apuron, faced a canonical trial with the results still pending; the dispute on the controversial Yona seminary finally broke; and the catholic community made it clear that they wanted justice for victims of pedophile priests.

“We’re still, obviously, we have a lot to do–the trust of the faithful and rebuilding the life of the church,” noted Byrnes.

But in that time, Archbishop Byrnes has also made great strides in reversing some of the damage that was done to the church and its image.

The archbishop took back control of the Redemptoris Mater Seminary, which was at one point the largest point of contention for the catholic community; he ostensibly called for the exile of Archbishop Apuron by labeling his potential return to Guam a “disaster”; he reorganized the administrative makeup of the church in an effort to have a more accurate accounting of its finances; and he established a better relationship with church non-profits, leading to the end of weekly pickets at the cathedral, among other accomplishments.

But amid all that, Archbishop Byrnes continues to express his humility.

“I made some mistakes coming into things. Some of that I think was plain ignorance,” noted Archbishop Byrnes. “And I think it took me maybe longer than it could’ve to maybe to sort that out for my own perspective. I feel like I’ve got a better sense of where to get the kinds of input I need.”

But now that he’s got a better handle on church affairs, Archbishop Byrnes says the road to healing will continue.

His message to the people of Guam:

“Well first of all, thank you for welcoming me,” said Byrnes. “The biggest thing, especially around Christmas, it’s all about hope. What Christ brings is hope even in the face of challenges, even in the face of nuclear missiles. He offers a hope that’s indestructible and as long as we hang on to him and exercise our faith and exercise our faith especially by love we’re sure, we’re certain.”

The one year anniversary of Archbishop Byrnes welcoming mass was held on Nov. 30.