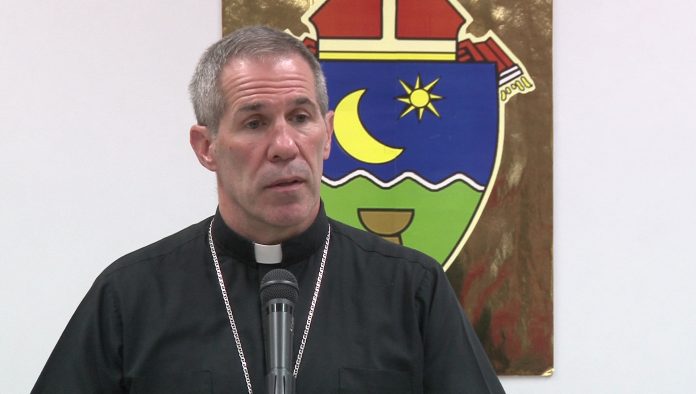 This policy is used throughout churches in the United States and is standard among diocese.

Guam – Some big changes for the Archdiocese of Agana were announced today as Coadjutor Archbishop Michael Byrnes said that they are now adhering to a new policy that deals with child molestation in the church.

It’s called the Charter for the Protection of Children and Young People and was established by the US Catholic Conference of Bishops. It was created in 2002 and then ratified in 2005. The charter has three main focuses, said Byrnes.

“Why are we doing this? Well the provisions of the charter of the US Congress of Bishops has three main foc: number one, to assist in healing of those who have been injured; second, to protect children and young people; and third, to restore trust and harmony and faith to our community,” he said.

Furthermore, Archbishop Byrnes says this charter is recognized as having some of the best practices in the world in protecting minors. Byrnes adds that over the last few weeks he has been meeting with various priests, catholic school teachers and catechists to talk about adopting this new policy.

“In my time with the priests and the principals, I tried to communicate that this is just the right thing to do. This is the gold standard throughout the world and my very strong appeal is that they would embrace all the ramifications. It’s gonna mean more work for all those involved in ministry,” Byrnes explained.

The guidelines are clear and more strict, he said.

“It’s not only just best practice when one becomes aware of the sexual abuse of minors, one should go to the civil authorities first; in the charter it’s mandatory. We must alert civil authorities right off the bat,” said Byrnes. “Second, regarding offenders there’s zero tolerance. One instance of sexual abuse of minors results in permanent–that’s substantiated–once substantiated, the instance, results in permanent removal of public ministry.”

In addition to adhering to this policy, Byrnes says the church will be required to undergo an audit. This is to ensure compliance.

“Under the charter we need to record and document every person who would receive this training and then parishes will be audited by an independent agency, which we still have to work out, to certify that we are complying both with the education but also background checks,” explained Byrnes. “So we’re making ourselves accountable to someone independent of us.”

So if this charter for protecting children is hailed as being the gold standard and since it’s been around for nearly 15 years, why hasn’t Guam adopted it before?

“This is not a justification for it but the USCCB is the conference that’s part of the United States bishops. Guam is under Oceania region,” explained the editor of the archdiocese’s newspaper Umatuna Si Yu’os Tony Diaz. “Notwithstanding that we’re not part of the USCCB, Archbishop Byrnes, in consulting with his spiritual counsel, have made the determination we’re going to go with this. As far as answering why in the past, that I don’t know.”