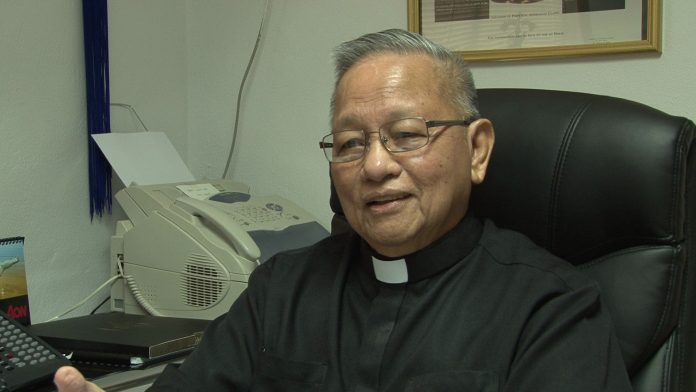 Guam – The Archdiocese of Agana is urging catholics, particularly those demanding immediate action, or patience as they work to bring unity within the church.

While some are calling out apostolic administrator Archbishop Savio Hon Tai Fai for lack of action, the Archdiocese says the only person who can make those decisions is the pope.

It’s a time of deep turmoil within the Archdiocese of Agana. Four people have accused Archbishop Anthony Apuron of sexual abuse, his administrative duty was removed, replaced by Archbishop Savio Hon Tai Fai, whom many had trusted would take swift action in light of the sex abuse allegations.

We’ve heard from the many protesters, critics, alleged victims and even some elected leaders. So we sat down with Msgr. Bibi Arroyo, the newly appointed spokesperson for the archdiocese.

“I know that if they have these allegations then say, ‘Hey, I want revenge. I want you to do something right now.’ We need also to be patient. It’s not really that easy. The church, also, when it comes to dealing with allegations of bishops, that’s different,” explains Msgr. Arroyo.

At a public hearing on Bill 326 yesterday, former Senator Bob Klitzkie slammed Archbishop Hon for what he believes is lack of action. The bill, introduced by Senator Frank Blas Jr., seeks to lift the statute of limitations indefinitely for taking civil action against perpetrators or the institutions protecting them.

“Hon wasted his opportunity. Hon was greeted by catholics who had high hopes for his success in cleaning up the mess and he had the authority to start the cleanup. Hon almost immediately dashed those hopes,” Klitzkie stated at yesterday’s public hearing. “While he holds nearly plenary power with respect to child abuse and to the survivors thereof, Hon has done nothing but occasionally imply that survivors’ complaints may be resolved against them in favor of Apuron.”

“His main thing being out here is not to investigate but rather to look at the things, what is going on in the archdiocese and see how he’d be able also to bring the church back together and move forward. All the allegations that would be, it’s not within his parameter, but rather to give it to Rome,” says Msgr. Arroyo.

PNC: “You said that only Rome can make that deicison when it comes to bishops. So Archbishop Hon doesn’t have that power?”

“No. All he can do is basically be there, say this is what the allegations are and then he presents it to Rome and Rome will decide on what to do … when it comes to the bishops it’s gotta be the decision of the pope So nobody can remove the bishop from the diocese or archdiocese except for the holy father because he’s the one who puts them there, so he’s the one to remove.”

In the meantime, Msgr. Arroyo says Archbishop Hon is working to instill unity and harmony within the church. Msgr. Arroyo also says that the church is reaching out to the alleged victims.

As of news time, Doris Concepcion, who says her son was molested by Archbishop Apuron, says no one from the Archdiocese has reached out to her. She also says that the three other alleged victims have not been contacted by the Archdiocese either.

Calls to Father Patrick Castro, the point of contact for sex abuse victims, were not returned as of news time.