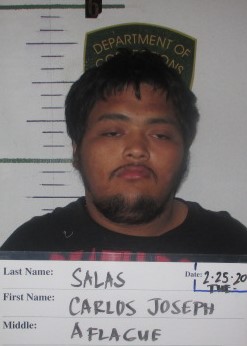 A couple found arguing outside Sling Stone Coffee shop in Anigua is now behind bars on drug charges.

Police arrived at the location where the verbal altercation was reported and discovered Rhiannon Marie Torres Blas and Carlos Joseph Aflague Salas Jr. arguing outside the vehicle.

But what started out as a verbal altercation later required the assistance of a drug-sniffing K-9 to go through the couple’s vehicle.

Police smelled a strong pungent odor coming from the vehicle during an initial check of the vehicle.

They also discovered that she was in possession of numerous credit cards belonging to different individuals.

Blas told police that Salas had borrowed her pouch the night before and returned it that morning, saying she did not have any knowledge of its contents.

Meanwhile, Salas appeared to be nervous and kept eyeing his vehicle. A search of the vehicle was conducted resulting in the discovery of marijuana, drug paraphernalia and methamphetamine.

A K-9 unit arrived at the scene and alerted authorities to the presence of drugs in the contents of a bag in the front seat. Salas claimed the bag belonged to his cousin.

More credit cards belonging to different individuals were also discovered in the backpack.

Both were booked and confined on charges of possession of a scheduled two controlled substance and theft of property.