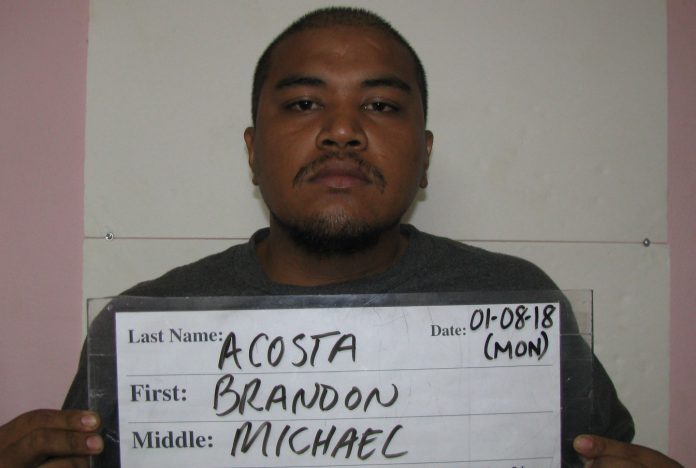 Guam – Authorities believe they have the man responsible for the murder of 15-year-old Timicca Nauta and it turns out, he is no stranger to crime.

Late last night, the Guam Poioce Department announced that an arrest had been made in the murder of Nauta.

Cuffed and hanging his head low, 24-year-old Brandon Michael Acosta was escorted into the Hagatna Precinct by detectives. He stands accused of stabbing the teenage girl in her Dededo home in June.

According to GPD Spokesman Sgt. Paul Tapao, Acosta allegedly confided in an individual that he committed the crime.

“During the course of the interview, Brandon Acosta had admitted his involvement in the death of Timicca Nauta,” explained Tapao of the interrogation conducted by criminal investigative detectives.

On June 16, the teenage girl was discovered by family members murdered in her home, but very little information was made public. To this day police remain mum on the details of how Nauta was killed.

But it appears that Acosta has had several run-ins with authorities and has at least three active felony cases against him for crimes he allegedly committed this year.

Court documents indicate that on the day Nauta was discovered, Acosta was out committing other crimes and may have even gone on a crime spree.

According to court documents, Acosta burglarized a home on June 16, stealing a man’s wallet. Over the course of four days he allegedly hit two other homes, stealing items like a blower and a child’s piggy bank.

Acosta was arrested days after on charges related to theft, burglary, criminal trespass and possession of a schedule two controlled substance but police were unaware of the gruesome deed he is accused of committing.

In July, while in jail, Acosta was allegedly discovered with prison contraband–namely a cell phone.

But prior to this crime spree, Acosta was also arrested on charges of family violence. Court documents state that on January 7, he strangled his ex-girlfriend when she tried to break up with him.

A look at the cases and charges against Acosta may shine a light into what may have motivated a man like Acosta to kill Nauta, pointing to burglary, which may be tied to Acosta’s alleged drug use.

Police arrested Acosta last night for aggravated murder; aggravated assault; use of a deadly weapon in the commission of a felony; home invasion; burglary; criminal trespass; criminal mischief; and obstruction of government functions.