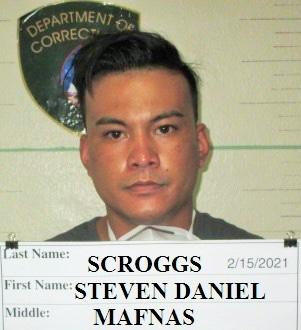 The Guam Police Department has arrested a 32-year-old man for family violence.

Police say that on Monday, February 15, their officers responded to a disturbance report at a residence in Chalan Pago a little before 9 p.m.

The reporting person told officers that her son, Steven Daniel Mafnas Scroggs, had assaulted her other half and younger son.

Scroggs accused the reporting person of paying his ex-girlfriend to stay away from him and he had begun yelling at her and calling her bad names, according to court documents.

Victim #1 told police that Scroggs stood in an aggressive fighting stance with his hands up as if they were going to box.

Scroggs then hit victim #1 on the left side of his face and punched him again, said victim #1.

Victim #2 told police that he tried to separate Scroggs and victim #1.

Scroggs has been charged with 2 counts of family violence as a misdemeanor.