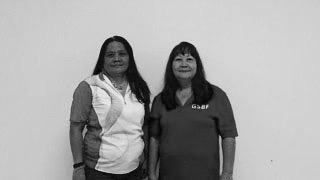 In the grand finals Arriola underplayed her nerves and played a steady game of accurate spare shooting prior to her threee bagger to finally get the title she had been coveting for quite some time.

CENTRAL LANES BOWLING CENTER- When it finally came to the championship round Sunday afternoon at Central Lanes, there wasn’t a man standing. Instead two women senior bowlers preparing for a March friendship international tournament in Taipei managed to outbowl their male counterparts to make the January Senior Bowler of the month title game an all female affair. In the end, it was second seed Thelma Arriola who used three strikes in the 7th, 8th, and 9th frame to power past 4th seed Liz Langas 239-209 with handicap to capture the 2016 January Senior Bowling title. It was Arriola’s first title and best finish in this tournament.

Sunday’s tournament had surprises starting with super senior Juan Tenorio finishing first after the 6 game qualifier plus handicap with an astonishing 1321 pinfall. That surprise was coupled with Arriola having to start the shoot-out round by having to beat veteran Norison Catbagan in a two frame roll-off to secure second place putting Catbagan in the third slot.

Catbagan ended Viray’s title run in the quaterfinals while Langas upset Cascasan to advance to the semi-finals. Langas upset top seed Tenorio while Arriola upset Catbagan in to continue her championship quest.

In the grand finals Arriola underplayed her nerves and played a steady game of accurate spare shooting prior to her threee bagger to finally get the title she had been coveting for quite some time. The victory was a confidence builder for both female bowlers who will be going to compete  in Taipei in March.

The next Senior Bowler of the Month will be held at Central Lanes will be onSunday, February 28th at 11A.M. This handicapped event is open to all bowlers 50 years of age or will be 50 by the December 31, 2016.